There’s a scene near the end of Saving Private Ryan in which Matt Damon and Tom Hanks sit together amidst the ruins of a French village. They chat, but not about war, or those who’ve died to get there, or the hell of it all. Instead, Damon’s character recounts a hilarious story from before his brothers’ wartime woes, back when they were normal, young men having a laugh at home. The story is partially improvised, Damon’s eyes lighting up throughout, as a bewildered Hanks looks off-screen as if to say “is this really happening?” Eventually it’s revealed that this was the last time the Ryan brothers were all together before they were shipped out. The veneer of happiness is shattered, and the horror of war returns. But just for a moment, one moment, everything was fine.

It’s an example of the “moment of levity” that are often in war films to remind us that the people we’re watching aren’t just weapons on legs, but normal humans with have emotions beyond that of stony eyed despair and misery. In This War of Mine, the hugely successful and unrelentingly bleak survival sim, no such levity exists. You’ll force a grin every time you successfully return from a night-time scavenge with enough food to feed your post-war survivors, but even then the cost will often have been too regrettable to bear. It’s the kind of feeling that makes you want to take a bath afterwards, scrubbing away the guilt and the gloom that a few hours of play have caked onto your conscience.

However, 11 bit studios’ recent trailer for This War of Mine: The Little Ones, arriving on consoles next year, couldn’t be more different. To the spritely beat of a song by Offspring (of Crazy Taxi fame of all things), two kids run around outside in a visibly decrepit neighbourhood, playing and mucking about on tank manufactured from cardboard and duck tape as if they haven’t a care in the world. At the end, the camera pans up to show smoke billowing from buildings just down the road, the sounds of gunfire and bombs going off the sinister accompaniment to images of a war gone sour.

But do the kids mind? Not on your nelly. And that, in a nutshell, is why The Little Ones will make an already good survival simulator a great one. 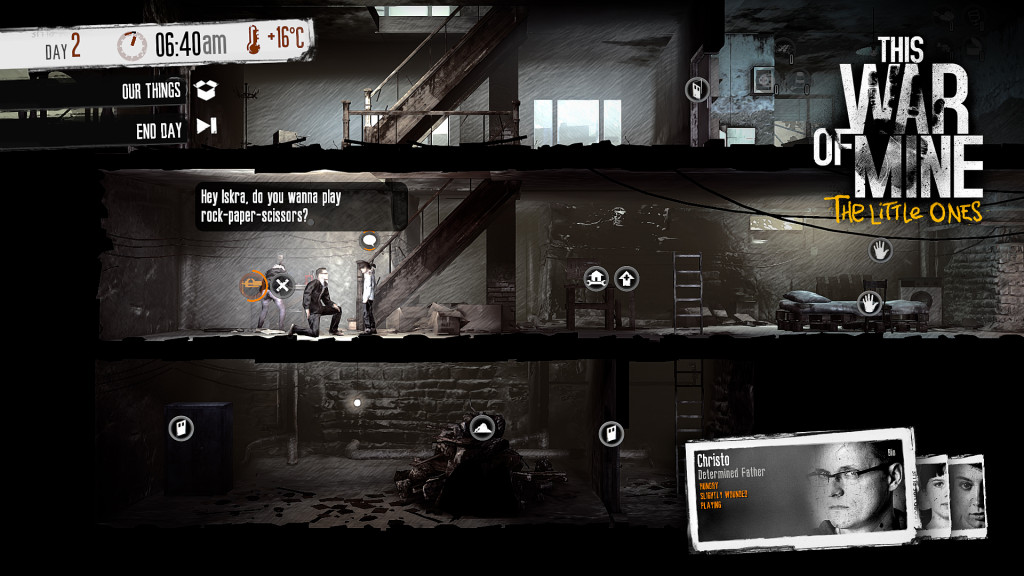 In many ways, adding kids to a game this dark will only make things more depressing. It’s already hard enough keeping your ragtag band of barely alive refugees from starving to death without having young mouths to somehow feed as well. Indeed, as well as a new perspective on an already established world, The Little Ones will be their own challenge, requiring a little more handholding than their adult counterparts in This War of Mine’s distinctly harsh environments.

That said, it’s the “broadening spectrum of emotions” the kids will apparently bring to the game that will really push it to the next level. Children won’t just sit around bemoaning their lack of iPods and Happy Meals. Instead, they’ll laugh and play, draw on the walls of their shelter and make use of the various toys you’ll be able to create for them. Life still won’t be sunshine and rainbows, but they’ll be bringing a bit of joyous energy to an experience previously characterised by a man named Pavel whining about the lack of cigarettes before sobbing into his pillow.

For the record, there’s no doubt that This War of Mine already depicts war in an unforgettably emotional way. You feel terrified when a shotgun-wielding maniac appears out of nowhere in a house you thought was empty. You feel crushed when someone pass away from illness, leaving a hole in the team you’ve been working to save (and nobody left to defend the shelter during night jaunts). You feel torn when tiptoeing into an old man’s cellar and nicking his meds, effectively cutting his remaining lifespan in half. This truly is anti-escapism, and returning to the game becomes more and more difficult as you progress, particularly if you aren’t proud of some of the decisions you’ve made. 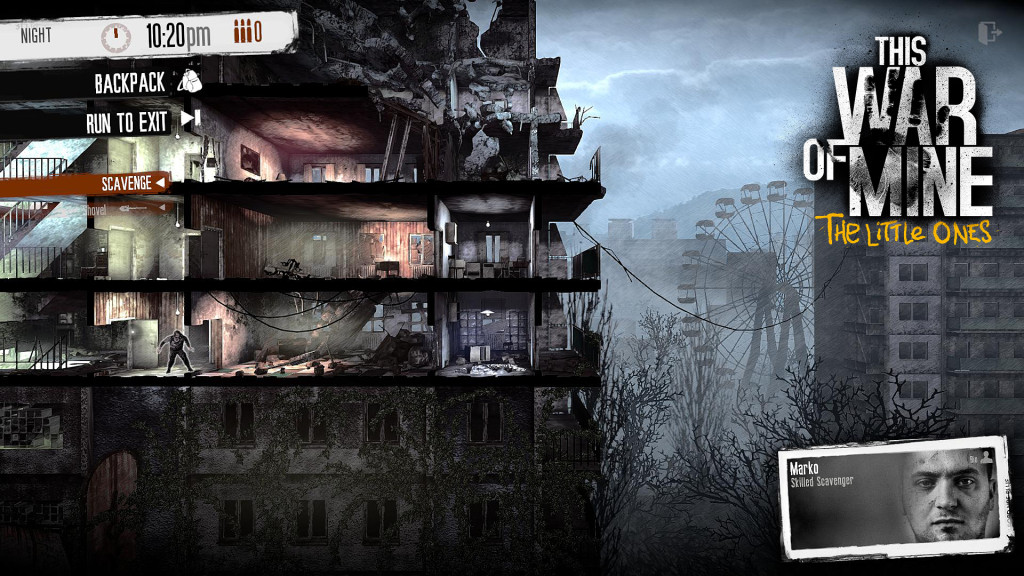 However, the addition of children, laughing and trying to enjoy themselves despite everything around them, will do much to quell the feeling of futility that previously ran across every aspect of This War of Mine. It will provide those “moments of levity” which were previously reserved for beating the game and seeing your survivors thrive during peacetime. And, hopefully, you’ll feel much more of a human connection than before; shelters during the day won’t just be full of walking zomboid depression units, but will have little sparks of happy here and there. And that’s something that will make you care a lot more about the actions you take, and the people you might hurt.

I’ve never been in a war. I’ve never had to experience the brutal aftermath that This War of Mine depicts. And yet there’s something to be said about the way humanity is depicted in games about ugly events, and the different ways people handle them. Had games such as Fallout not included comedic elements as well as well as more traumatic themes, it wouldn’t have been half as engaging to world to explore, and the same is true with This War of Mine. Equally, Lee’s relationship with Clementine in the first season of The Walking Dead, and the way it evolves beyond the tragedy of her parents towards a more playful father-daughter motif, is something you could easily imagine being reflected poignantly in the Little Ones.

In short, I’m seriously looking forward to this expansion. Not just because it will provide an entirely new sense of danger to an already peril-ridden game, but also because it will give precisely the opposite: a bit of a relief now and again. As a result, if This War of Mine was already a great strategy title, now it seems to be shaping up into one I actually have the strength to keep playing.