Inject A Bit Of Colour Into Your Life

Way back when the first trailer for Dreamwork’s Trolls was released, there seemed to be a collective groan from the majority of people. After all, a film based around toys isn’t exactly a new concept, especially when it is related to such an old toy to begin with. Sure, this new take on the Trolls was refreshing considering how hideously scary the original line of toys were but what could you actually do story wise with something whose only purpose was to have its hair brushed? The very first teaser didn’t give us much to go on, other than the fact that it was obviously going to be some form of musical animated adventure. Well the film has finally landed. So how does it stack up? Surprisingly, it is pleasantly delightful to watch for a number of reasons. Why? Simply put, this film could be defined as being the anti Strange Magic. Everything that film did wrong, Trolls does right. 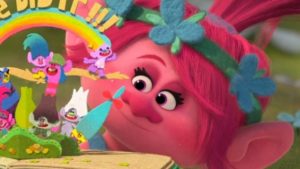 The story introduced to us is simple and not overly convoluted, thankfully. There is enough to engage its intended family friendly audience. Deep in the forest there live the titular creatures known as the Trolls. They are insanely happy all the time. They sing, they dance, and they love to give each other hugs. On the other side of the spectrum, though, are the dreaded Bergens. The Bergens are always miserable and are only capable of feeling happy if they eat a Troll. Due to this, they have a holiday each year where each Bergen gets to eat a Troll and feel happy for just the briefest moment. Deciding that they are tired of being someone else’s snack, the Trolls escape their prison and live out twenty solid years of partying and freedom. One Troll named Branch (Justin Timberlake) is never happy because he is extremely paranoid about the Bergens returning to eat them all. His foil comes in the form of Princess Poppy (Anna Kendrick), who in her effort to celebrate their freedom, throws the biggest party ever that succeeds in attracting a Bergen to their home. With many of her friends captured by the creature, Poppy convinces Branch to embark on a quest to go rescue the kidnapped Trolls before they can be served up for dinner. Despite the simple set up, the safe method probably works in its favor, unlike Strange Magic which had an overly complicated plot that literally no one could get behind. 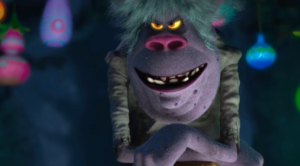 There are many colourful characters in Trolls aside from our main pair; and they are of course voiced by some big names as well. To name only a few, you have Poppy’s friends such as Biggie (James Corden), Creek (Russel Brand), DJ Suki (Gwen Stefani) and Guy Diamond (Kunal Nayyar). On the Bergen side, we have the wonderfully smug and snarky Chef (Christine Baranski) trying to manipulate the Prince of the Bergens, Gristle Jr (Christopher Mintz-Plasse) through the promise of delivering Trolls once more. With this film being a musical adventure, there are plenty of songs injected in it to fill up the soundtrack album. Honestly though, it is a welcome addition and the songs actually make sense in their inclusion. The majority of them are covers with slightly changed lyrics to fit the scenario. But once again–unlike Strange Magic, they fit into the narrative. Justin Timberlake’s contribution Can’t Stop The Feeling is the perfect break out and dance number that showcases how happiness and music is so integral to the Troll way of life. A surprise entry in the film is a dark and dreary rendition of Gorillaz’ Clint Eastwood sung by the Bergens themselves, highlighting how downright miserable they are in their everyday life. The songs have a reason to be there unlike other animated films that just shove in whatever relevant pop number is out right then. 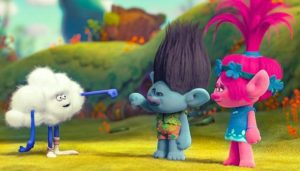 The overall design of the film is also a pleasant surprise as well. Strangely enough, the whole film has an arts and crafts feel to it. The Trolls almost appear as if they are made of fuzzy felt while their rainbow-like hair does indeed look real enough to brush through. There are a few segments that use an arts and crafts scrapbook style of storytelling which is amusing to watch and breaks up the adjoining sides of the story. The Bergens, on the other hand, perfectly reflect their moody and miserable lifestyle, with torn and scratchy looking clothing and skin that looks rough and employs swampish looking colours. Their town also encompasses their bleak existence: televisions play only static on them and gross muck is thrown out of their windows onto the broken cobbled streets below. The world surrounding the two homes of the main creatures is quite refreshing. The movie is colourful and filled with inventive looking critters, but at the same time there is an element of danger. Everything looks so warm and inviting, yet many aspects of the scenery actually turn out to be cleverly camouflaged monsters that will eat just about anything that wanders close to them. To show the stark differences in their personalities, everything is colourful and wonderful reflecting Poppy’s beliefs, while at the same time there is danger everywhere like Branch insists throughout the entire run time of Trolls.

If there is any fault in Trolls it might be some of its instances of it trying to use ‘hip and trendy’ humor that easily date the film. Lines such as ‘sick burn’ and ‘phat with a P’ highlights the film’s attempts at pop culture humor. On top of that, Trolls plays it safe with its threat levels as well as in its conclusion. You aren’t going to be seeing anything that would alarm a child terribly as you are in for a family friendly outing. Compared to some of the other releases that have happened in 2016, though, Trolls is certainly closer to the higher tier for animation. Superb voice acting, fun songs, and an upbeat message about finding the happiness within yourself makes it a fun film to warm yourself up for the upcoming holidays.