There’s two things in life that people tell you never to discuss: politics and religion. Unfortunately, 2016’s political scene (both in the United States and abroad) has made the former subject extremely hard to avoid. With election day upon us in the U.S. of A., we might as well throw our hat into the ring with some candidates of our own. Here are our Top 10 Video Game Presidents. 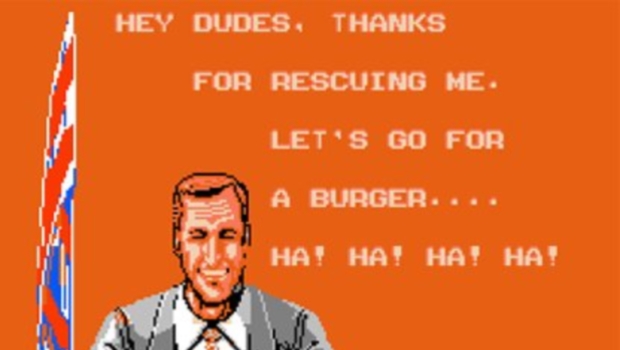 “Are you a bad enough dude to rescue the President’s daughter?”

This was the question posed by Bad Dudes, a video game from the late 1980s. It wasn’t until the follow up to Bad Dudes, Bad Dudes Vs. DragonNinja that the President of the United States in question was given a name, Ronnie, in a pretty clear dig at Ronald Reagan. President Ronnie and his daughter exist solely to be MacGuffins in the plot, such as it is, of the Bad Dudes games. The underlying logical inconsistencies, flailing appeal to teenage machismo, and utter lack of care for character design or development displayed by the opening question of Bad Dudes have become a meme-worthy window into 80s game development culture.

“Hey! Did anybody proofread this copy for the Bad Dudes opening?”

“Well that never stopped us before.” 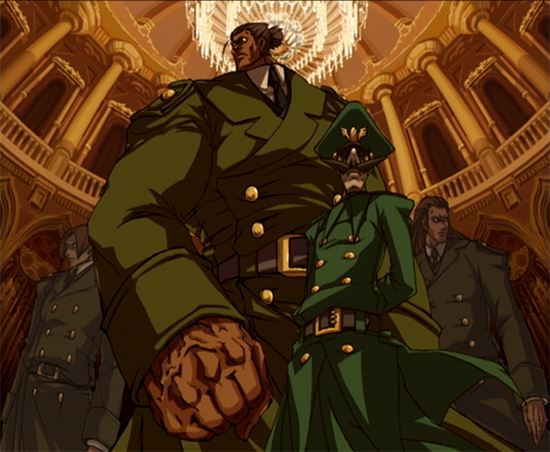 Fighting games don’t usually focus much on things like the government; it’s usually relegated to just some kind of evil empire with a big bad emperor or something to rebel against once an evil conspiracy is revealed, with an evil mastermind at the helm. This makes the nation of Zepp in Guilty Gear, led by the mysterious President Gabriel, a bit of an outlier among its peers. It’s kind of fitting, considering their political autonomy in the game’s universe (after a revolution which freed the country’s slaves and promoted Gabriel from a Sergeant to the head honcho). While Gabriel mostly takes a backseat compared to his protégé Potemkin, he still cuts an imposing figure throughout the series with his ability to keep a rebellion-ravaged country at peace. Gabriel’s no slouch in the fighting department either, showing off his explosive fist-fighting capabilities against the likes of the lunatic Bedman in Guilty Gear Xrd. Hail to the chief-and good freaking luck to anyone standing in his way. 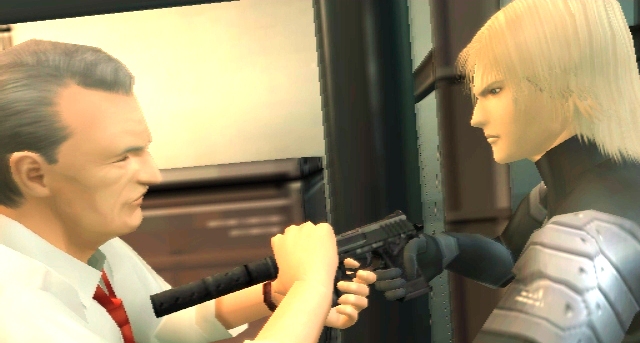 Do you guys remember that one NPC in Metal Gear Solid 2 who grabs Raiden by the crotch then proceeds to spout expository dialogue for fifteen minutes in a cutscene?  Well something a lot of people forget about that guy is that he’s supposed to be a sitting President of the United States, named James Johnson. It must, of course, be noted that in the fiction of Metal Gear Solid 2: Sons of Liberty President Johnson is a member of a conspiracy to gaslight Raiden as part of an experiment testing the hypothesis that a human mind can rendered controllable by bombarding it with bizarre, irrational, often conflicting information and events. In this context a certain amount of indecorous, unpresidential behavior is to be expected. President Johnson is also a puppet of the Patriot an AI system designed to secretly control world events. During the events of Metal Gear Solid 2 President Johnson is held hostage by former video game President who also appears on this list. 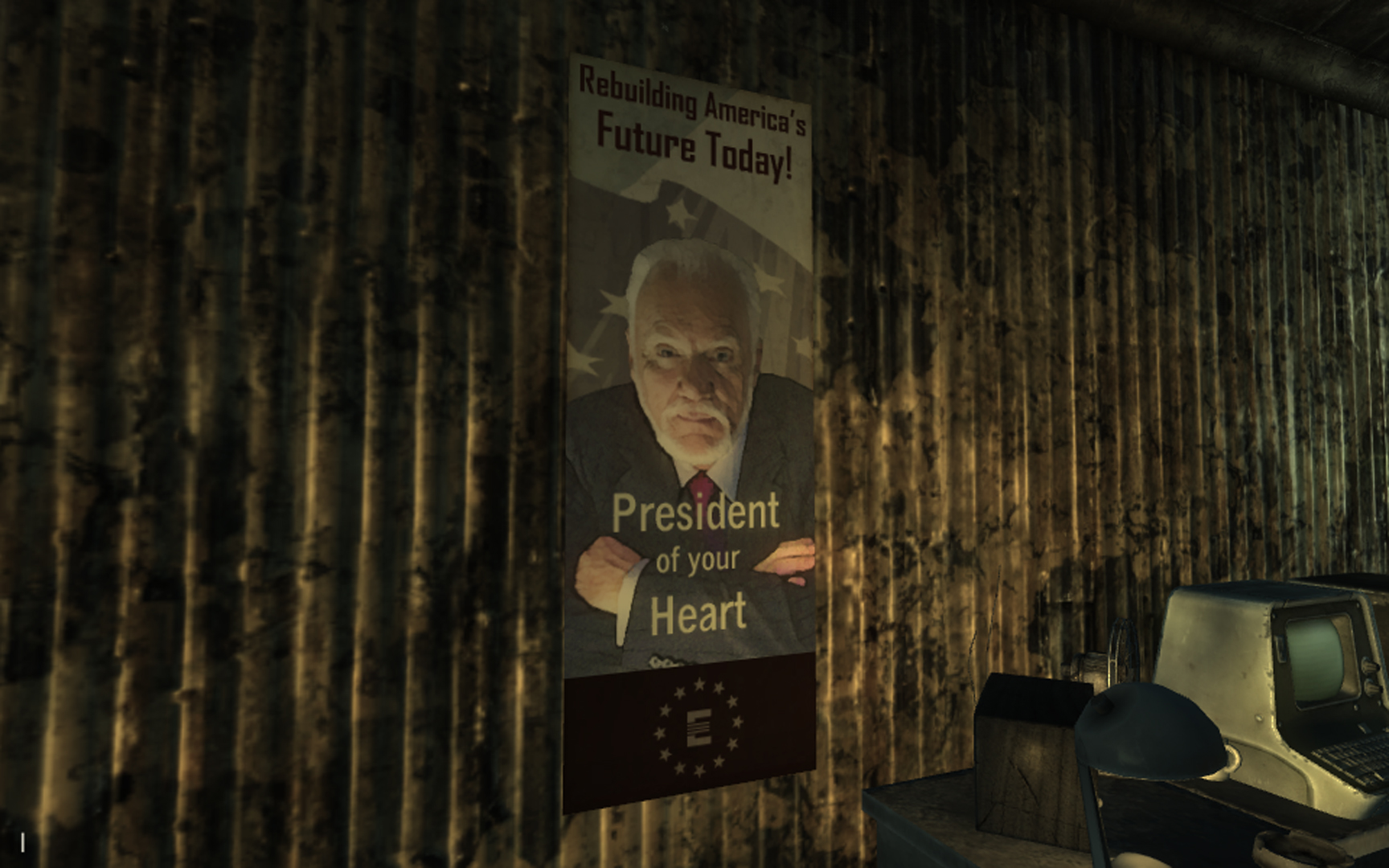 The AI president from Fallout 3 lands here on this list for many reasons. Firstly it’s through the fact he has modeled himself after multiple past POTUSes; surely that makes you a badass president if you made yourself to be like many other good presidents right? Secondly it’s because of just the general uniqueness of President Eden. He’s an AI that survived through the Great War that caused all the apocalyptic business that led to the state of America in the Fallout franchise and has gained sentience. That’s a pretty unique president and frankly it’s that great amount of weirdness as well as intelligence that Fallout is famous for. However I must note that morally, Eden is not that great. When you do encounter him he is trying to hyper evolve the remnants of humanity into Mutants or worse and frankly that’s a bit dodgy. But hey being morally bad doesn’t make him any less interesting and worth having on this list. 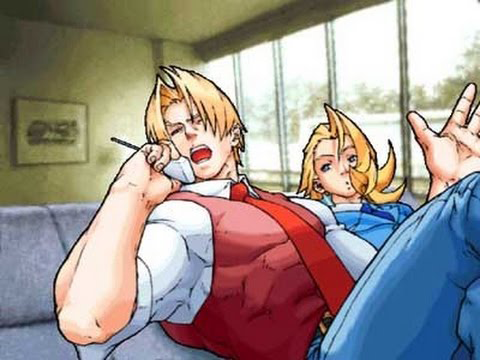 It’s always fun to hear the stories of average Americans who eventually become the leader of the free world. Frontiersmen, war heroes, high school quarterbacks-turned-street-fighters…wait, what was that last one? Roy Bromwell, a dim but determined high school exchange student in the Capcom fighter Rival Schools, is the quintessential American success story. Sort of. Initially a Japan-hating jock with a bad case of brainwashing (courtesy of Justice High School), Roy was rescued from his dire straits by the ostensible main character of Rival Schools, Batsu. Touched, Roy eventually moves past his xenophobia (proceeding to rescue Batsu during the events of the second game) and goes home intent on changing the world for the better. He does this by becoming the President twenty years after the games’ events. Can you imagine how debate night must’ve gone down in that world? Either the other candidate just gave up when he saw Roy, or there was an epic battle for the ages between the two candidates. Or there might have just been a debate. Who knows. For him, an election is probably just another battle.