Summertime, and the living’s easy. What better way to spend your summer than taking a trip to the ocean? Whether you’re diving deep into the ocean or your plan has crashed on some remote place (which may or may not be controlled by a crazy person.) So come with us on a virtual tour of the top 10 best ocean based games without ever having to leave your darkened rooms.

Ever wonder what scuba diving in the deep blue ocean would be like? Personally afraid of taking a dive into the endless ocean? Well, worry no longer! In Endless Ocean, you take control of a diver on board a vessel with a woman who wants to show the world what lies beneath the surface of the ocean. To do so, she requires a diver – you! Playing Endless Ocean is like watching it on YouTube; the sense of awe and exploration (mostly nostalgia for those who played it) and not-so-terrible Wii motion controls make this deep sea endeavor worthy of our number ten spot on this damp list.

A wise man once said, “surfing’s not a sport, it’s a way of life, it’s no hobby. It’s a way of looking at that wave and saying, ‘Hey bud, let’s party!’” When Tony Hawk’s Pro Skater was at its peak, it inevitably spawned a slew of knock-offs. One of these “inspired” variants was Kelly Slater’s Pro Surfer, and surprisingly, it was actually really fun! While it plays incredibly similar to Pro Skater, Pro Surfer definitely has a more laid-back feel to it. All your focus is on the wave, rather than the whole level, and there’s definitely a more freeform approach to how you string together moves. The soundtrack also has all the chill. And besides, who doesn’t want to surf some tasty waves as a Tiki God?

What better game to make a list of the best water games than our childhood Hydro Thunder? Who doesn’t remember rocking out in the huge arcade boat seat and flying through each high speed water level? And if you couldn’t get enough (or your kiddo wallet was too thin), you could pop in the N64 cartridge of Hydro Thunder and continue your racing at home. The game featured a decent variety of speedboats and a number of stages, each full of the high octane that made the game so damn fun. Waves (see what I did there?) of nostalgia hit me as I remember racing my father at Dave & Busters. 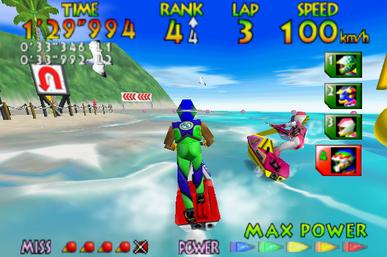 The waves crash beneath you as you exert yourself to maintain control of the aquatic craft beneath you, turning and curving around the buoy flags in an attempt to be the first to cross the finish line. And don’t forget the inspirational ‘80s-esque soundtrack to keep you pumped up for the next race! Wave Race 64 was very similar to, say, a BMX game, but the constantly changing waves made each lap a unique challenge. Early stages like Dolphin Beach may seem like a seabreeze, but the waves become far more difficult to navigate when playing on levels like Marine Fortress. There’s even an easter egg where you can trade in your jetski for a dolphin. How awesome is that?

Ever wished that you could explore the deep blue ocean but, like me, are slightly (read:definitely) terrified of jumping straight into the ocean with nothing but some scuba gear. Abzu is the perfect solution to those who are unable to take that trip into the underwater world. The game is solely exploration, allowing the player to interact with each environment and all its inhabitants (organic and mechanic.) Grab onto a sea turtle or a giant bass and get ready for an adventure of a lifetime, à la Nemo-style. Abzu comes from a small company known as Giant Squid, which is led by the art director of both Flower and Journey. It also won “The Best of E3” in 2016. If you love exploration games, then definitely give this one a try.