The Escapists: The Walking Dead Review

Here’s the mantra that appears to have crossed many a developer’s mind recently: “If it ain’t broke, don’t fix it.

Except if you want to add zombies.” Team 17 are the latest to ‘zombify’ a winning formula, merging popular prison strategy sim The Escapists with The Walking Dead. You probably know the latter more than the former. It’s the one where strangers meet up, moan a lot, and get eaten, like some kind of nightmarish Tinder date.

But does chucking a load of festering walkers at The Escapists improve the experience? Having a pixelated Rick Grimes as a main character is definitely one way to get gamers shuffling to their Steam accounts. Plus, the deep crafting and problem solving of the original indie hit remains as rewarding as ever. Nevertheless, the apocalyptic setting adds new limitations to a game that already took place within the confines of strict barriers and routines. This might well be how to survive an apocalypse, but for a few hours in front of a monitor, it’s just not as enticing as it was before. 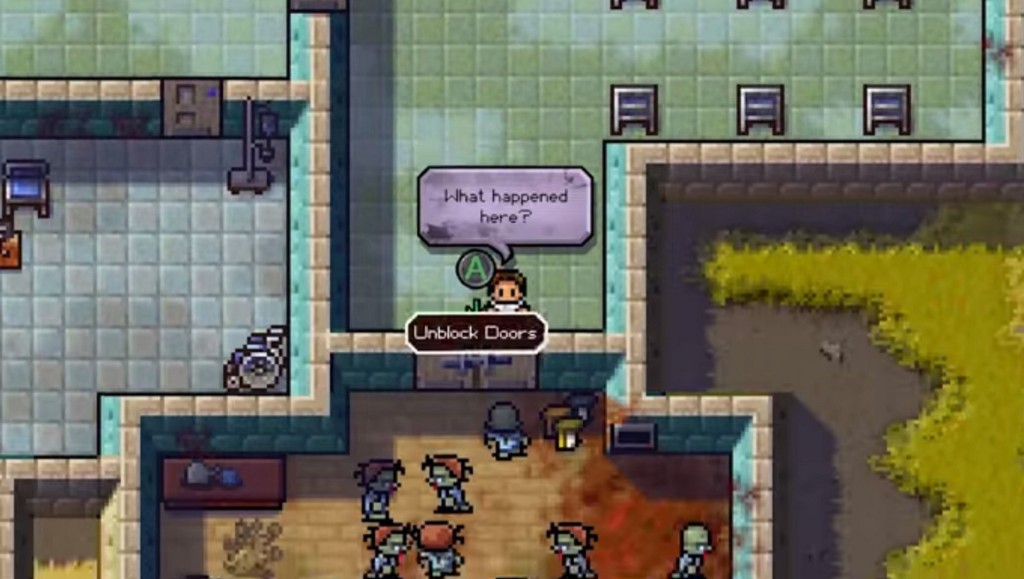 If you never played The Escapists, this edition nabs most of the original’s structure and briefs you on it. So, don’t fret. Playing as pixel-Rick from a top-down point-of-view, you’re placed in an open level where players can complete mini-quests, find components, and craft an array of useful items. You’re given stuff to do by other survivors, who’ll tell you to fetch things, or kill a zombie to fetch the thing it was carrying, or combine things together to finally get the thing they wanted. It’s simple, if a little disgruntling. “Okay, I’ll go do that. You just keep wandering around aimlessly, Glenn. No, it’s no trouble, really”. Prick.

Aside from bearing the brunt of numerous survivor requests, you’ll need to stick to the schedule the game gives you. From dawn till dusk, you need to be in the right place carrying out the right activity at certain times of day, whether it’s taking a head count or grabbing lunch at noon. Failing to keep up with appointments carries sanctions, although the shift in setting means prison guards will no longer clobber you for acting up. Instead, the threat level for the entire camp will rise, which I can’t really get my head around. So, if I forget to do the laundry enough times, we’ll all be ripped limb from limb by snarling undead monsters? I’d better get the Persil then.

Outside of those times, you’re free to acquaint yourselves with each of TETWD’s levels, which take place in various locales from the comic book series. Unlike The Escapists, in which the only goal was to get out of jail, here, the final objectives are based on five story snapshots from The Walking Dead canon. On Hershel’s farm, for example, your end goal is to arm up the rest of the survivors and storm the barn full of walkers, while another level sees you powering up a generator. Many of these end goals will be recognizable to fans. So, unless you want spoilers coming at you in pixel art comic panels, it might be wise to steer clear.

However, the real problem with story-based approach is that it doesn’t gel with The Escapist’s sense of freedom. Each final objective only has one solution, unlike the first game, which effectively let you create your own personal Prison Break story arc with a variety of different escape methods. Levels feel disappointingly linear, not quite to the extent of Telltale’s Walking Dead experience, but far too much for a game with such a heritage in playing your own way. 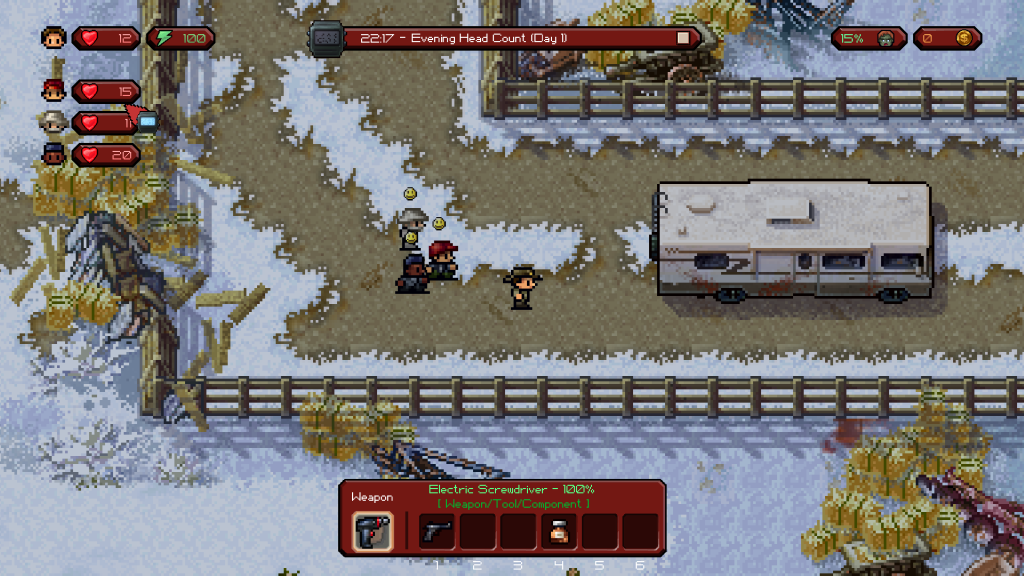 Then again, even if the levels are a bit one-note there’s more than enough variety to crafting, provided you’re not the sort of Rambo gamer who needs to get shit done immediately. There’s no handy hints to get you going a la Minecraft here. The game will tell you the bare minimum before fleeing the scene, leaving you with nothing but an empty inventory and a lot of experimentation to do. Better loot can be found further afield, and often going out at night is best to avoid pesky chores during the day. You can also spend coins you’ve acquired from other survivors on merchants at night. But, more stuff pops up in desks and backpacks as the days roll on.

Items are certainly bountiful, and sticking them together to form makeshift weapons, armor and medicine is easy and intuitive. The real challenge is finding and figuring out the correct combinations of items to progress. It will provoke the bulk of head scratching in between meals and doing laundry. Don’t forget the laundry, remember? The zombies will start sharpening their cutlery if they see even one dirty pair of DKNY undies, you fool! Hustle!

Rather irritatingly, the game’s occasionally bizarre design choices continue with the randomized placement of items. Presumably this was to ramp up challenge, but you can’t help feel the game would be more fun if there was any logic to where specific items are dropped. I tired quickly of searching an entire kitchen for a bar of chocolate before finding it stashed away in a random desk half a mile away. It just seems like padding more than anything, even more so when characters get all sniffy because the screwdriver you brought them wasn’t from a particular zombie. Seems a little petty having a personal vendetta against one zombie, doesn’t it?

Something a lot less obscure is that the combat in The Escapists feels about as clunky as a cat playing air hockey. It’s not the focus of the game, to be honest, but attempting to CQC zombies like in Lollipop Chainsaw will end in death a lot of the time. The precision of character movement just doesn’t allow for big hordes of enemies. You’re almost always better off running away if more than two are on your tail. This is The Escapists, after all. 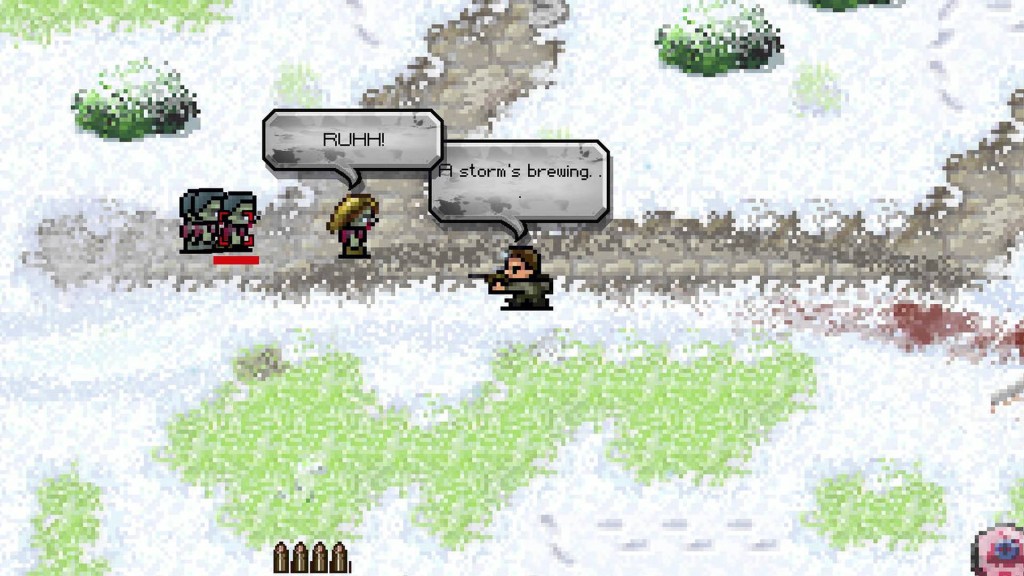 You’re able to recruit recognizable survivors to follow you around like shovel-wielding androids, but like everything else, combat requires patience. Finding time to work out in specified gym areas will allow you to improve your health and speed, the latter being vital if you want to run rings around brain-craving attackers. You’ll also be able to improve an intelligence stat too, which is crucial if you want to craft better items. None of the mini-games are particularly scintillating, but they do take your mind off detergent and washing machines for five minutes.

Just like it’s predecessor, the routine activities you’ll undertake begin to form a stable rhythm until you’re crafting, lunching, looting and laundering while days go past in a pinch. But, ultimately, the repetitive chores and necessities that have you lugging back to home base make you yearn for more freedom. What’s more, a lack of guards snooping on your every move makes things a lot easier, but it also removes the tension that neatly contrasted most of the first game’s cutesy visual charm.

The game’s greatest pitfall is that progress doesn’t carry over from one level to the next. Nothing is more frustrating than holding on to a prize uberweapon you’ve manufactured from duct tape, a sword, and Lori’s tears only to find you need to start all over again in the next zone. It’s a move that only needs to more padding, more routines, more building up your character, until activities that initially seemed a bit humdrum soon become a pain in the backside.

The crux of all this is that a certain avenue has been taken with The Escapists, one that makes it more palletable to the player who perhaps hasn’t been a cunning jailbird yet in the first game. However, in rebranding itself with The Walking Dead, The Escapists seems to have taken the spirit of what made the original game unique, while keeping the less interesting aspects intact. The crafting remains fun, and discovering what combos you can rustle up is a solo challenge worthy of attention. However, so much of the game feels like filler, you’ll be aching to get there sooner.

Overall, The Escapists: The Walking Dead freshens up the visuals with some fresh corpses, but its amendments make for an experience that feels more restrained in execution. This is particularly true when it comes to linear solutions hemmed in by a need for story. Zombies might have overrun the gaming world at the moment, but for now, I’d rather be in jail.