Shape of the World Review

Video games funded by Kickstarter often fall into one of three categories. They’re either resounding successes, inspiring indie developers to seek crowd funding and stunning critics and fans alike with innovation – or they’re absolute trash, despised by those who shelled out hard earned cash to support a title that held promise but failed to deliver (Mighty No. 9, anyone?). The third category sees the games fall into either a development hell or completely vanish, unable to deliver a final product to the unfortunate saps who supported it (it’s happened to me, too; we’ll be okay). Shape of the World falls in to none of those categories, though it tries its hardest to reach the pinnacles of an artistic masterpiece.

In Shape of the World, you take on the role of what I assumed was a “creator”. By reaching various triangular shaped gateways, you could trigger the advancement of the world around you, your ultimate goal to travel through each of these passages. As you do so, you can destroy trees and the life around you, or you can, with the aid of seeds (should you be able to collect any), plant/re-plant more trees on your journey. You will, of course, find objects and creatures to interact with, but your journey is a simple one: walk, jump, and float your way to the ultimate goal line. 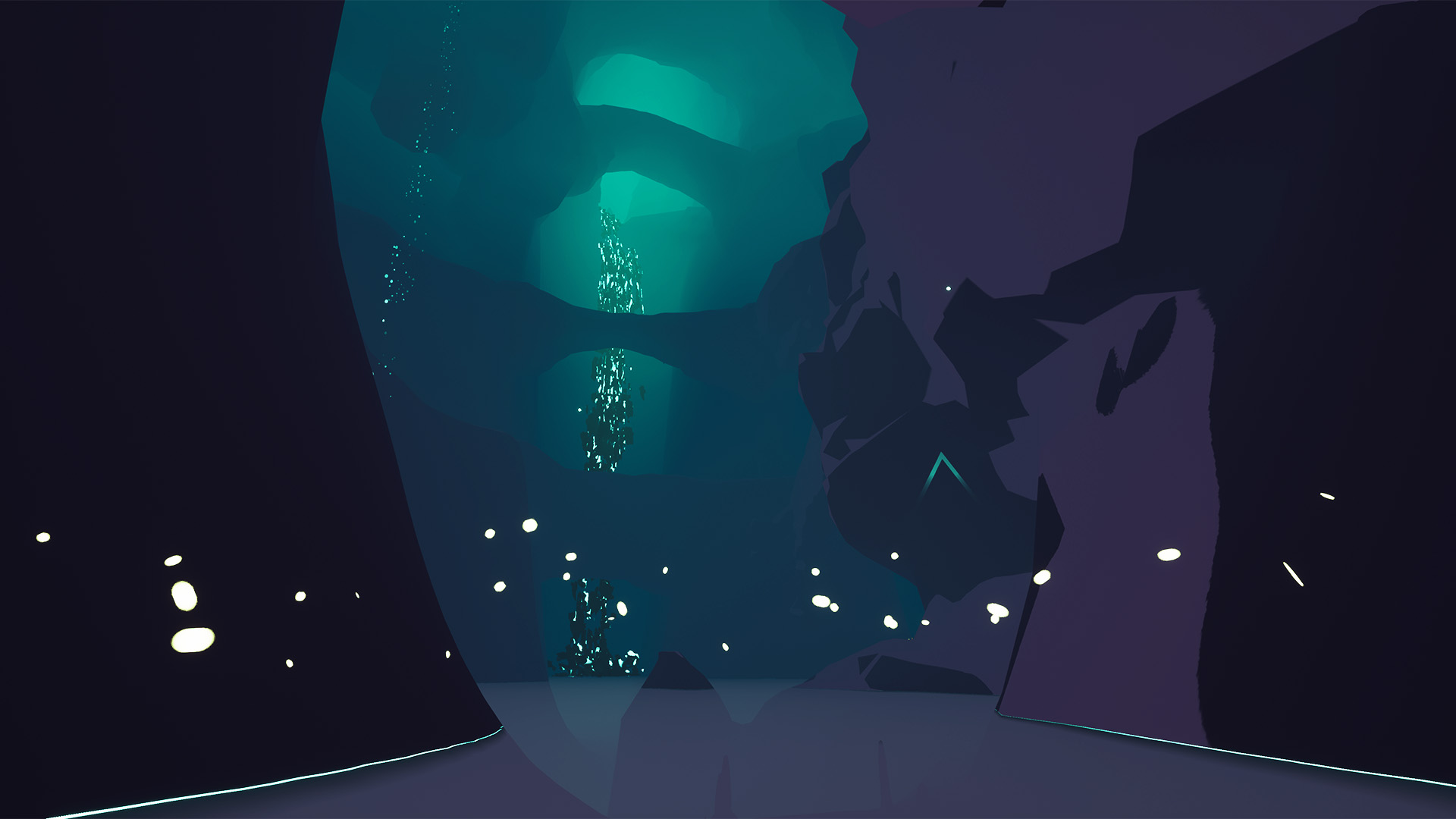 Gameplay in Shape of the World is simple. It’s a glorified and colorful walking sim that has you exploring the ins and outs of an ever-changing environment, one malleable to your actions. In order to reach many of your goals, you’ll need to interact with various monuments that are scattered about the terrain. There’s typically a group of four monuments per ‘area of advancement’, and you’ll need to touch each one to gain access to a stairway that leads you closer to your next goal (one that speeds up your movement tenfold). Should you need to travel significant lengths and heights, you can use cave pots and other glowing stones to catapult yourself in any given direction.

The main draw, however, of Shape of the World – for me, at least – was its colorful palette and ever shifting lighting. The colors and creatures and atmospheres of Shape of the World shifted with each new adjustment, sending me through effervescent lighting and technicolor environments that were beautiful to wander through. My biggest complain, however, was that the latter segments of the game drastically darkened the once bright and pastel lights. What once may have been a calming blue sky deepened into a blood red and ebony setting, continuously falling deeper into darker depths. It was cool at first; profound, even. That is, until I could no longer see where I was walking. The last hour of the game, all I could do to advance was try to find glowing objects and hope they were the right direction. After a slew of trial and error attempts (and unlocking a few trophies for floating/flying for a long time without touching the ground), I eventually made my way to the penultimate gateway. It certainly didn’t kill the entire experience, but it dulled my sense of wonder so much that I stopped caring about the beauty of the game and began desperately trying to find footing.

Fortunately, the music in Shape of the World was able to alleviate a portion of my frustration. Reminiscent of Mass Effect and Blade Runner, the soundtrack for Shape of the World felt borrowed from 80’s sci-fi (in a very good way) electric and often haunting vibes. The frequencies and feeling that yawned from the sound was wonderful and fit the setting, colors, and idea of the experience well. I was particularly enthralled with the sound at the very end of the game, right before and through the credit roll; combined with the brightening lights, I was then disappointed my journey had come to a close.

For review purposes, Shape of the World is one of the most difficult games for me to cover. Walking sims have never directly appealed to me, but the colorful trailer and potentially deep idea of the game really called out to me. But I left the game feeling like I gleaned very little from the experience, so drawn in by the colors (and lost by the lack thereof) and the subtle music that I’m not sure why I made my way through this shifting world. Maybe that’s the point of the whole thing, that life and the world can be both beautiful and full of color and dark, depressing, and difficult to traverse. 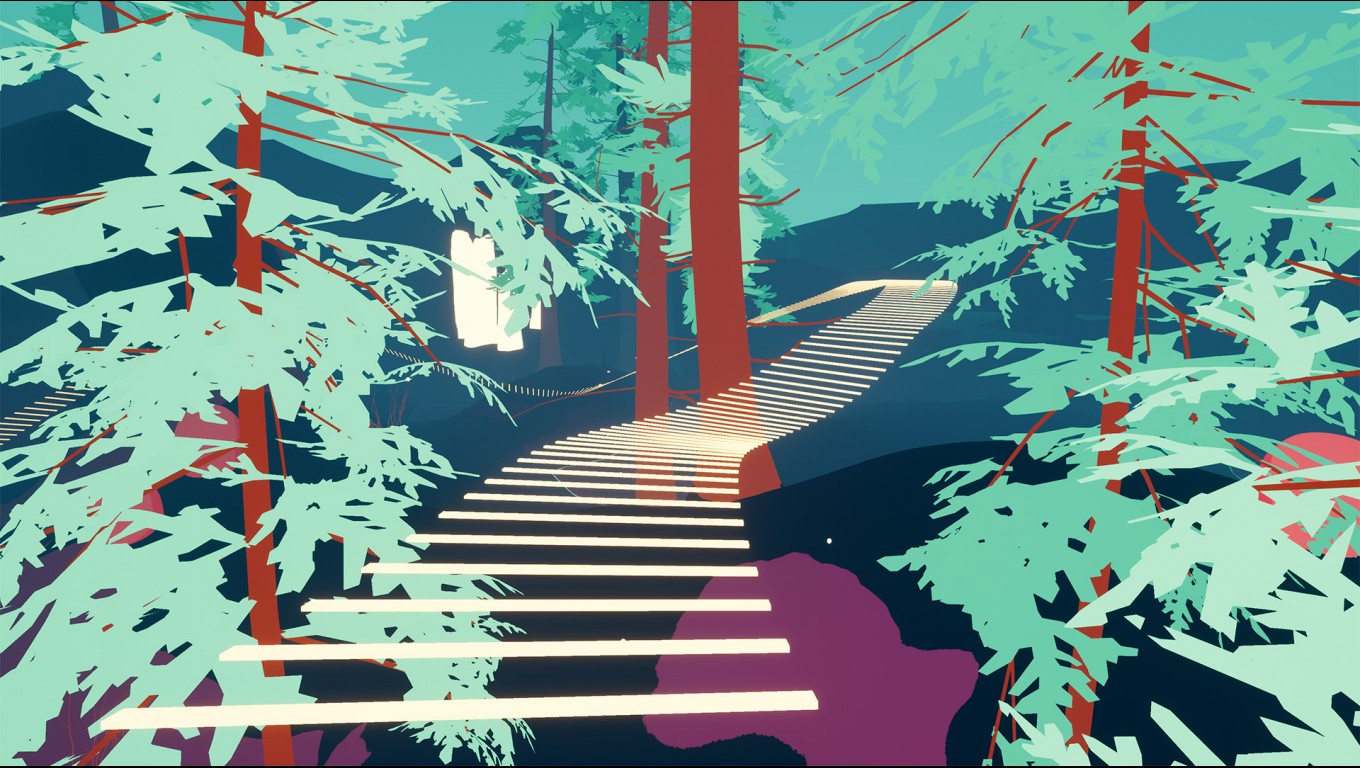 In any case, if you’re interested in experiencing the colors of Shape of the World and finding out what it means to you, then I’d recommend giving it a shot. It doesn’t take terribly long to complete, and for $14.99, the price isn’t too high. Shape of the World encourages multiple playthroughs – and has trophies for distance walked along with speed runs – and I’d recommend that, too. In a short experience like this, multiple playthroughs makes understanding a bit easier.

Shape of the World Review
Beautiful colors and world when visibleSubtle but powerful soundtrackInteresting idea and sound execution
The inability to see in a quarter of the experience makes the overall product sufferThere really isn't much to do outside of walk, touch monuments, and pick up and plant seeds
68%PS4
Presentation85%
Gameplay49%
Visuals73%
Sound85%
Value50%
Reader Rating 0 Votes
0%