Prepare to embark on a journey through your worst fears.

Video games often cross the boundaries of genre in order to create an experience interesting enough to draw in gamers who may not necessarily have been intrigued otherwise. The late Midway attempted to blur horror and RPG into one game when it released Shadow Hearts in North America during 2001. The end result? A strong effort that only clicked with fans willing to try something new.

Shadow Hearts follows the story of Yuri, a troubled man haunted by an entity wearing a fox mask and guided by a heavenly voice. He is instructed to find a young woman by the name of Alice. The player begins seated on a train after watching a mysterious but fashionably dressed old man massacres a few Japanese soldiers whilst seeking Alice. You quickly do battle with the old man and are promptly defeated, but you are able to grab the girl and bolt from the moving train. From there, the story begins.

Shadow Hearts is an RPG at heart and infuses elements of horror creatively throughout the plot. For example, the first town that Yuri and Alice wander in to is filled with a group of cannibalistic citizens intent on feeding. These elements lend to the game’s mature rating, as the product bathes the gamer in no shortage of carnage, violence, or horrific events. As an RPG enthusiast, however, I found this change of atmosphere to be quite refreshing. Most RPGs tend to shy away from the brutality of combat – and to that extent, I understand why – but when a game like Shadow Hearts comes along, it definitely feels like a fresh experience.

The battle system is where the game really shines. Shadow Hearts incorporated the brand new ring battle system. Combat is turn based, and the player selects from a list of options that include attack, magic, items, and so on. But once you choose the action – let’s say attack – a ring appears with chunks of area shaded two separate colors. The goal is to watch a ticker (like a minute hand on a clock) swing around the ring and hit x in the shaded areas; if you can land the hand within the bolded sliver on the ring, your attacks will be critical hits. This, of course, is harder and easier than it seems. There is a bit of a learning curve, so the first few battles will definitely be frustrating, but once you get the hang of it, the combat is awesome. I couldn’t tell you how long I played the game simply for its combat system. And let’s not forget that the final boss is extremely difficult, as are multiple other fights throughout the game. Usually, this would frustrate me, but I took the opportunities to grind out some levels and felt wonderful when toppling those boss fights. 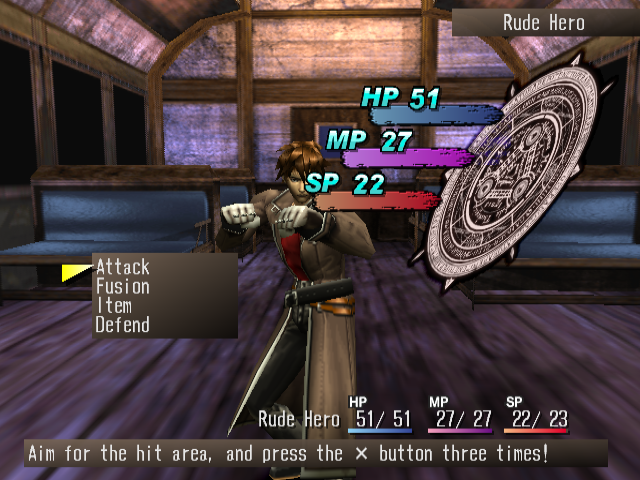 Another fairly unique aspect to Shadow Hearts was its World War I setting. It’s really cool to see the world imagined in Shadow Hearts near noire story. Since the game takes place between Europe and Asia, the player is able to explore the streets of Japan, the alleys of France, the sewers of England, and more. In fact, I think in almost any other setting, Shadow Hearts’ exposition would fail miserably. As it is, the dirty streets of a world at war served the creepy aspects of the game well.

Visuals for its time were mediocre. Consider that Final Fantasy X released the same year, and, understanding it was Square-Enix, looks years better than Shadow Hearts. But that’s okay, however; I did not play Shadow Hearts for its eye-crying graphics – though better visuals always lend to creating stronger horror games (especially for atmospheric purposes). The voice acting, too, in Shadow Hearts – though paltry – was pretty awful. Watch the opening cinematics to understand the plight.

Still, I can’t help but thoroughly enjoy Shadow Hearts. It’s one of the few video games I’ve been able to consistently come back to and enjoy each play through, which leaves it in pretty rare waters. The final product itself is certainly not free of problems or criticism, but the overall experience is something well worth your time. Unfortunately, a new copy of the game will run you most likely over $100, so if you’re looking to play this, I believe you can find used copies for around $50. If you’re an RPG lover who also dabbles in the horrific, then Shadow Hearts should offer you an excellent time.