A game that cuts deeps

Reviewed on Wii U

Developed by Drinkbox Studios, Severed is the story of a brown, one-armed warrior, Sasha–and the exploits to attempt to find her family. Heavily influenced by Latino culture, Severed is filled with bright colors, dark content, and a blurred line between the world of the living and the dead. Once a Vita exclusive, the game has since come to iOS, Wii U, and the Nintendo 3DS.

Entirely in first-person, with the exception of cut-scenes, the game begins with you stumbling across a mirror in a house. You are wearing a blood-stained dress and your arm is missing, 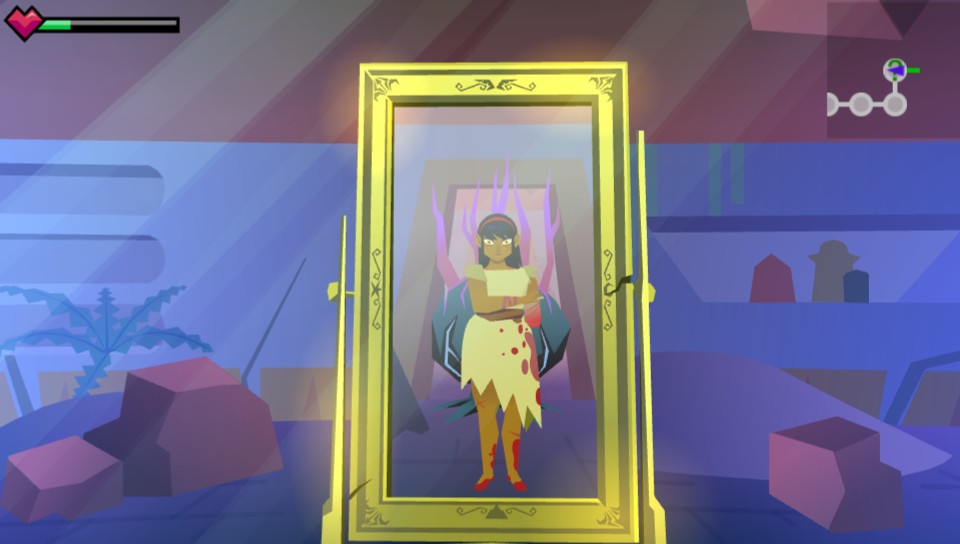 the sight of yourself triggers a gruesome flashback: a monster, an amputation, and your family (silhouetted figures) being attacked. Suddenly a creature wearing all black is standing behind you in the mirror. 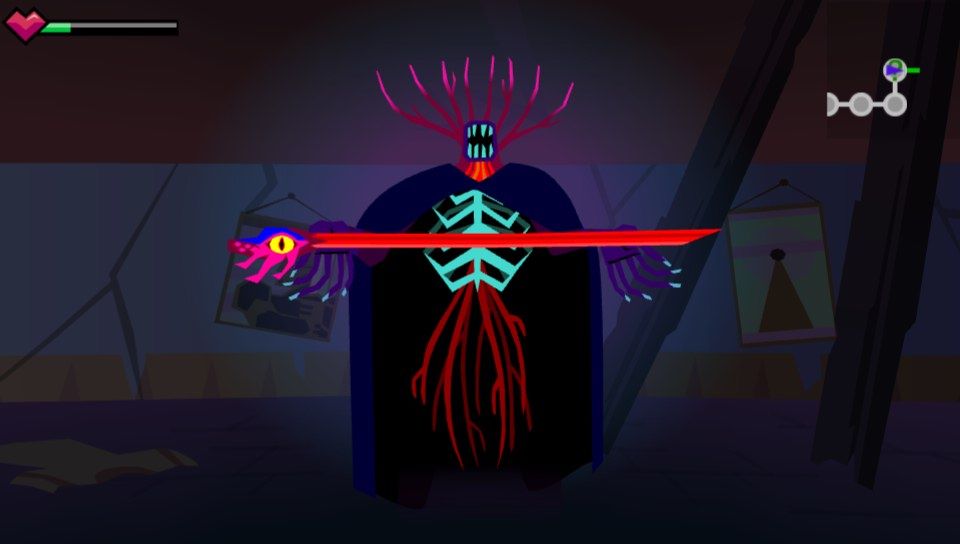 When you turn around, he gives you a sword and explains this is another world and only appears to be your home. Then he tells you your mission: “Find [your family], and bring them here. If you live, you may yet return home.”

Severed consists of swiping on the touch screen and moving the joystick to change direction/walk. The gameplay is a matter of navigating through different dungeons which are filled with different monsters. Each monster has its own characteristics in terms of attack and defense style. The goal is to weaken these monsters–then, when prompted on screen, sever their limbs and use said appendages to upgrade your abilities. This concept never fails to bring me joy / give me flashbacks to Kill Bill Vol. 1.

Challenge in Severed comes from fighting enemies that appear in groups: you’ll have to move the joystick to attack different enemies. There’s a solid amount of strategy involved when timing your offensive and defensive maneuvers, especially when you gain more powers in later in the game. 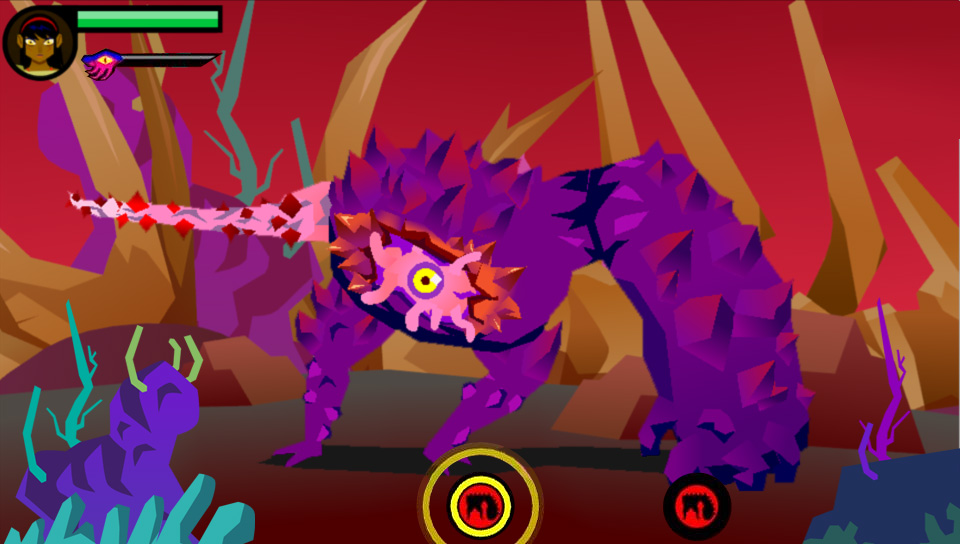 With each boss Sasha kills, she harvests their body parts to craft armor that gives her new abilities, such as certain types of magic. The end result is both practical and badass. This magic helps Sasha reach new areas. The progression system is based on an ability tree you can fill with the different body parts you collect. The more monsters you kill, the stronger you become. Once you unlock the ability to “transmute”, you can use some body parts to craft others–making it easier to fill your ability tree. 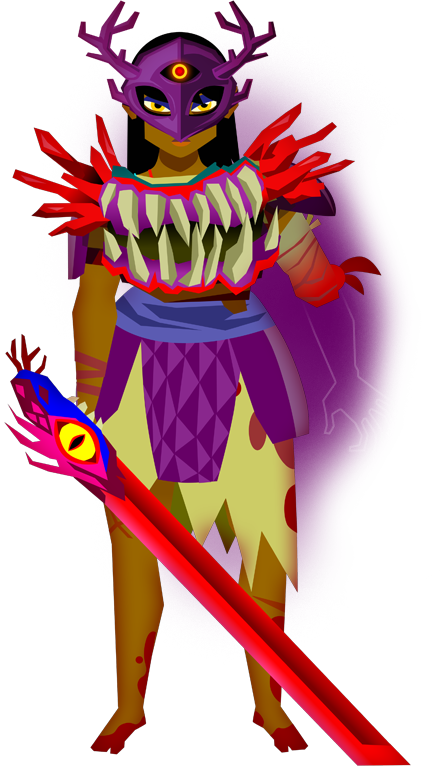 The key to advancing in this progression system is exploration and a willingness to backtrack once you’ve gained magical powers that allow you access to explore previously hidden areas from earlier dungeons. Body parts can also be found in uncracked jars which are spread generously throughout each dungeon. 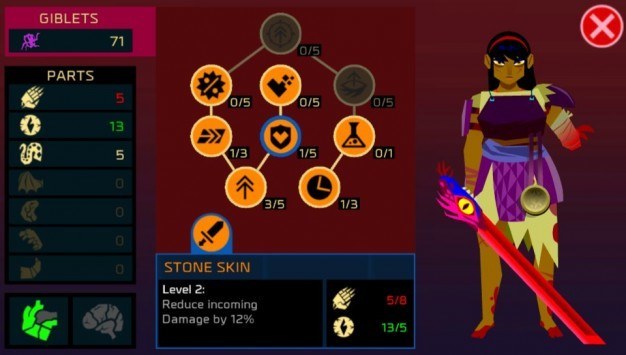 Everything is labeled clearly on the mini-map as far as doors, switches, and even health. While the official game site claims this game’s exploration “requires sharp wits to both avoid hazards and solve puzzles”, it really doesn’t. The thought required is minimal and a bit tedious, especially because every dungeon looks pretty much the same. But in Drinkbox Studios’ defense, I rarely looked where I was walking anyway as I spent most of my time staring at the mini-map and turning the joystick. 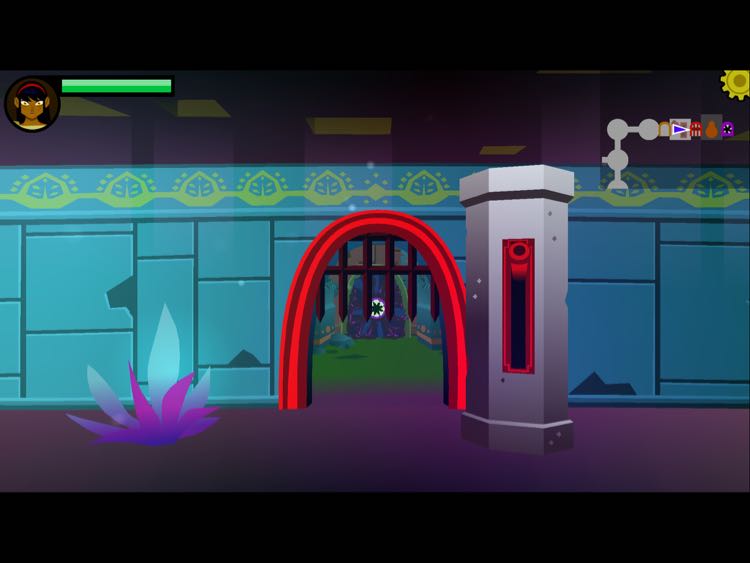 The simplicity of the gameplay is probably more a symptom of the genre. I was really bored by it. There’s only so many monsters to see. Swiping the crap out of my WiiU gamepad just isn’t that invigorating to me, although I loved how the screen jerks if you hit an enemy shield. It added an element of realism to this fantastical world and created additional challenge since it was hard to recover from that and land another hit.

For 70 to 80% of the game the only thing that held my interest was the cut-scenes and gruesome visuals: 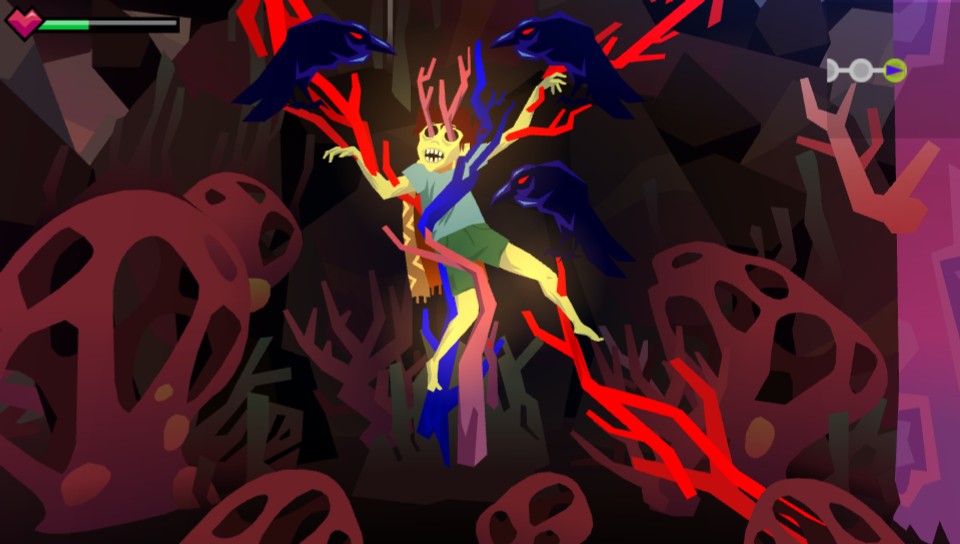 And most of all the monsters which resemble one of my favorite things in the world: Alebrijes. Alebrijes are a form of 3D art, born out of the fevered dreams of artist Pedro Linareas Lopez in the 1930s although many question the accuracy of that story. Regardless of how Alebrijes came to be, they are vibrantly colored fantastical creatures, often inspired by real animals. And as soon as I encountered my first monster in Severed, it was as if Mexican folk art came to life. Just look at these side-by-side comparisons: 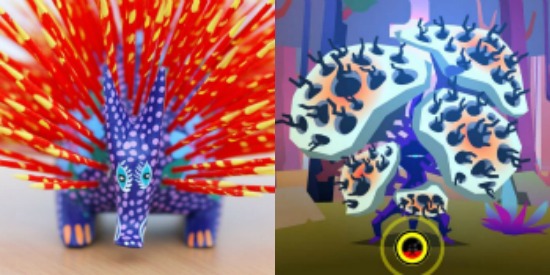 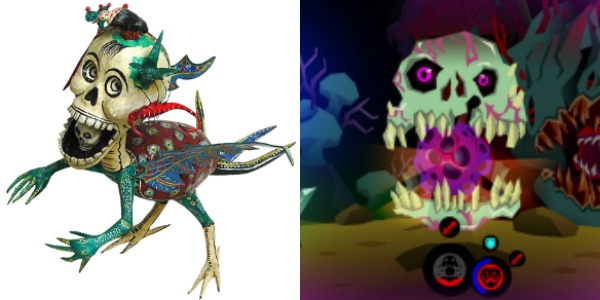 Because of the repetitive gameplay, easy dungeons, and (lest I forget to mention), horrible soundtrack/sound leveling, Severed is best enjoyed casually in short bursts. If I didn’t set out to review this game I probably wouldn’t have finished it. And what a shame that would’ve been… because in its final hour Severed became one of the most moving gaming experiences I ever had in my life.

I’ve already expressed my adoration for Sasha and the premise of the game itself, but I must delve further. As gamers, we all want cool, interesting, strong characters. For me, Sasha was so much bigger than that. Her silence throughout the game adds a layer of mystery to her and makes her a classic folklore/video game hero (reminding me a lot of Link in this sense). 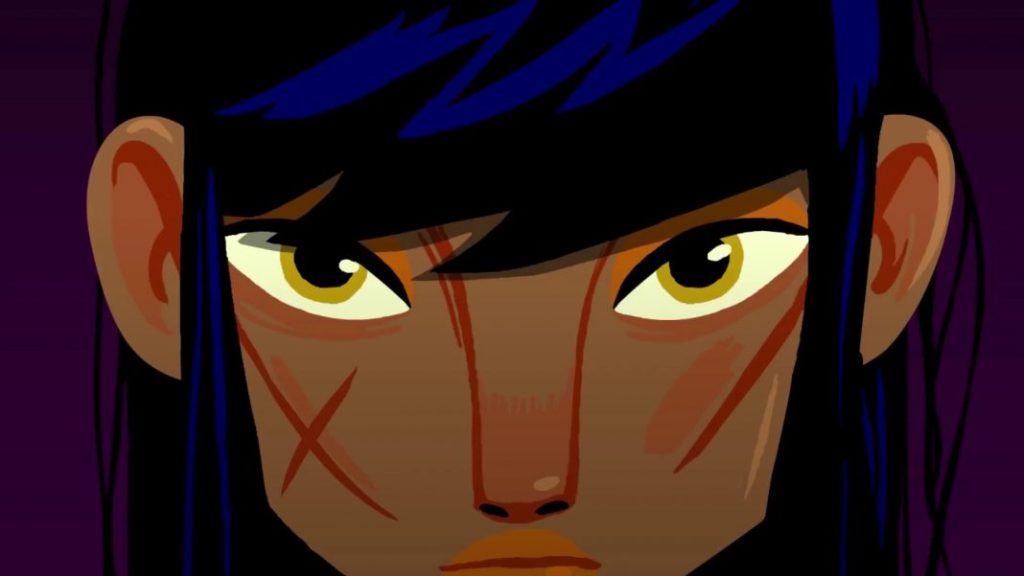 And, like myself, she’s a brown woman of color. Although I always advocate for representation, I didn’t expect it to increase my personal connection to the character; but it did.

But race aside, Sasha’s story is one that’s heartbreaking, moving, and relatable. When games have boss battles, it’s often a matter of defeating all of them and reaching the end for some type of closure or hint towards a sequel. But with Severed, the conflicts at play are both external and internal. Drinkbox Studios walks this line so perfectly and manages to have some of the most straight-forward yet emotionally powerful writing I’ve ever seen in a video game.

This game is a must play because of how incredible the ending is. Never before have I witnessed such a masterful display of power and vulnerability from a character. 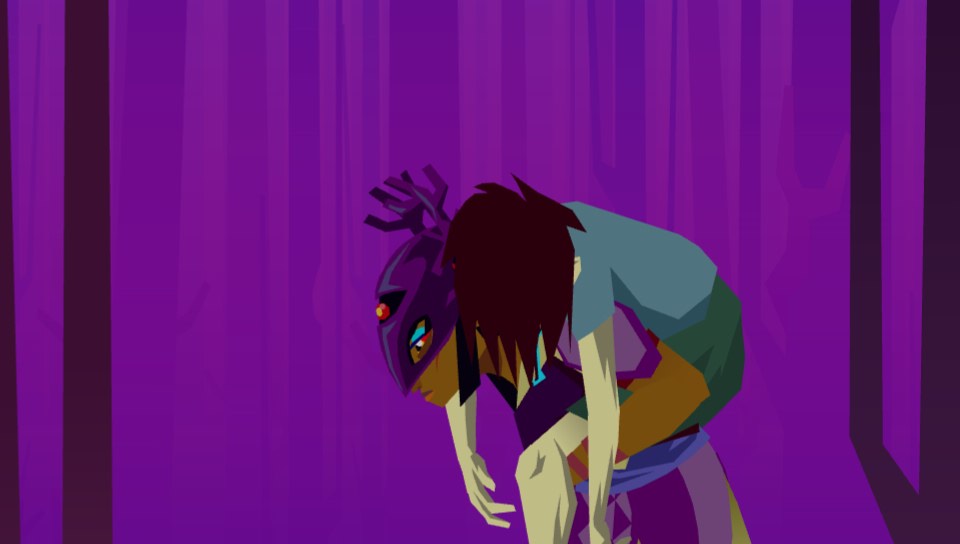 Severed is folklore come to life. Fantastical, repetitive and drawn out–it all leads up to an important lesson you’ll want to share with people for generations.