Rising Thunder: More of a Downpour, But Gathering Clouds

The realm of fighting games are largely dominated by a few large titles that are heavily intended for competitive rather than casual play. Typically, fighting games with multiple installments become increasingly more complex in terms of mechanics and execution, so players have to spend more time on previous games in order to play future titles competently. However, Rising Thunder does something about that by taking out previous mechanical problems in terms of execution.

Rising Thunder is a PC fighting game that comes from Radiant Games (owned by the Cannon brothers of EVO fame) and developed in part by Seth Killian. Killian, who was a developer at Capcom during the Street Fighter era, sought to make a fighter that could be rewarding, challenging, and suitable for all controllers, without all the precision problems that make typical fighting games so hard and inaccessible. Although Rising Thunder is just in its technical alpha right now,  it’s already doing a lot of the things that Killian sought to accomplish.

The cast of characters is made up of six characters spread out amongst three classes, Striker, Grappler and Gunner. These classes all have a range of unique “specializations” that feature a little something for everyone. You have the in-your-face boxer, a technical zoning type, two quick, light-damage, combo-heavy fighters, your standard wrestler, and whatever the hell Vlad is supposed to be. Gunner really shouldn’t be in its own class, because Chel, the Gunner, has one fireball attack that is rather limited in application. All the characters are robots, by the way. 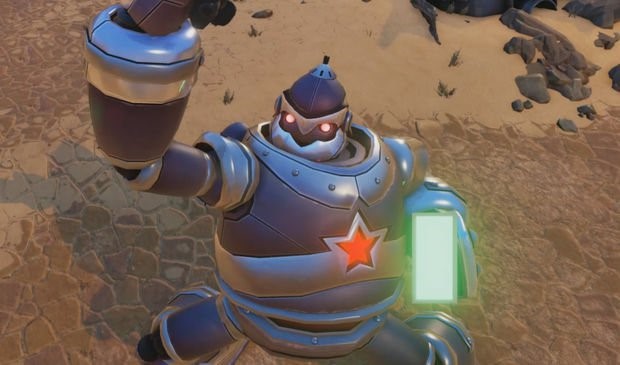 Play the game and tell me what Vlad is….

While this game contains many Street Fighter characteristics, execution-wise the game is fairly straightforward and just based on its controls. You have movement, and six standard inputs: Light Attack, Medium Attack, Strong attack (plus the variations for far, close, jumping, and crouching attacks), and your Alpha, Beta, and Gamma (which are the “special” movements). The game also features a one-button throw and a one-button “Overdrive,” which is governed by a meter, like in many other games. There are also cooldown timers on your Specials so you can’t abuse them. Additionally, there is a Jump Cancel meter (called your Kinetic Meter), for… Well, jump cancelling.

Rising Thunder’s objective was to bring the entry-level difficulty down by having a REALLY simple execution, so players don’t have to worry about the pervasive quarter-circle inputs. Since I’m primarily a Tekken player, I could appreciate the relatively basic execution. However, the game maintains elements of Street Fighter and other anime fighters: Creating and finding openings for attacks is done with spacing and footsies, combos are started off of punishes and hit confirms, and you link the same or different attacks together based on the previous moves frame data. And the combos… Dear God, this is where Rising Thunder has rather anime-like traits. The combos are long strings of attacks and Specials, thrown in with Overdrive. Bounce, wall stun, and then some more attacks or Specials. While I was playing it, I had to remind myself to not input quarter-circles or Dragon Punches.  Hell, I had to remind myself that directional inputs make almost any difference in conjunction with attacks. Moreover, to know that I have to coordinate the muscles to play this on a keyboard introduced an even steeper learning curve. However, I imagine playing this game on an arcade stick or controller would be more suitable depending on preference. Regardless of the peripheral, in the high echelons, you can accomplish intense feats.

If you’re not spending your time cramming combos and frame inputs into your skull, then you’re probably testing your skills online, which can be somewhat daunting. The game features a ranked mode with ranks such as Carbon, Bronze, Silver, and so on, with further tiers between each metal. However, the ranking system projects matches based on your skill level, not your rank. So, it’s very likely you can play a Silver-rank while being a complete noob, and get absolutely mangled.

Gameplay aside, the presentation of the game is top-notch for an Alpha. The curves and bends of each robot combatant shine sensibly, and the entire game is captured in a soft light which lends it a very dusty and gritty feel. The character select/online lobby are futuristic and cleanly designed, with new tweaks and changes done to the in-game HUDs to make features more noticeable. In terms of originality of concept, a fighter like this hasn’t been really been addressed in recent years. Perhaps only in Dynasty Warriors Gundam, at best. A full-on robot fighter with quick and dynamic controls and character models was always a dream of many players and this addresses that, although not in a really spectacular way. The robots aren’t incredibly stylized, which isn’t a bad thing. It doesn’t oversell the futuristic aspects of the game, which segues into the plot.

The plot? In short, there isn’t much of one, yet.  All the game really gives you is that each robot is piloted by someone from varying countries, and they’re fighting for someone undisclosed purpose in some bleary dessert. Additionally, the single pervasive background in the game is a desert with some wrecked machines in it, and it’s actually pretty well designed. The background scrolls as you move through the stage and has some marginally interesting features. Pebbles and dust are strewn about as each robot moves or lands. Musically, there’s barely anything to this game. Street Fighter didn’t have great or memorable music, so I can’t imagine this game having great music either.

As I said earlier, this Rock ‘em Sock ‘em Robots fighter was different in bringing something different to the table, but I don’t know if it’s necessarily new or fresh yet. Thus far, the game doesn’t truly do anything differently enough to really have its own niche spot in the fighting game world.  But everything I said prior to this boils down to one simple statement: this is an Alpha we’re talking about. This review will get more and more inaccurate in the coming weeks. Over time, the game will definitely gather steam and become far superior to what it is now. In due time, given that Seth Killian is heading this project, I hope that this game can come into its own upon its full release. The Alpha is presently open to the public, so playing now won’t cost you anything, just a little bit of time, and potentially some tears. All in all, it’s a solid game that can be enjoyed casually and is quite rewarding when advancing in skill. However, it’s not going to make you put down your other, bigger titles.  If you’re putting in practice time into other fighters, than keep Rising Thunder in the back of your mind for now and check on it in a few months. Patches roll out a few times a week, so you’ll be seeing plenty of differences in no time.