When PlayStation All-Stars was first revealed to the public under the code name Title Fight, it stirred up some online controversy, mainly due to its similarities to Nintendo’s popular brawler, Smash Bros. To prematurely label it a Smash Bros rip-off would be a disservice to what Battle Royale is all about. By creating what is an easy to pick up party title on the outside but a somewhat deep fighter on the inside, SuperBot Entertainment crafted the perfect multiplayer brawler that anyone ranging from the casual to the hardcore gamer can enjoy. PlayStation All-Stars enters the foray of fighters with a solid title worthy of its competition. It does so while celebrating almost two decades of PlayStation history.

First things first. The obvious comparison to Smash needs to be addressed as it’s been the game’s biggest criticism (whether good or bad) from the beginning. On the surface the two games look very similar, almost identical. Aesthetically, both games have the same look and it’s not a surprise that the game was directly inspired by Smash Bros, but the similarities end there. If you jump into All-Stars expecting a Smash clone, you’re in for a rude awakening. Where Smash Bros focused on getting your opponent off the stage with mostly single attacks, spacing and more accessible gameplay, Battle Royale focuses on putting pressure on the other players by linking attacks together and building up your AP meter to perform a special attack, which is the only way to kill an enemy in the game (more on that later). 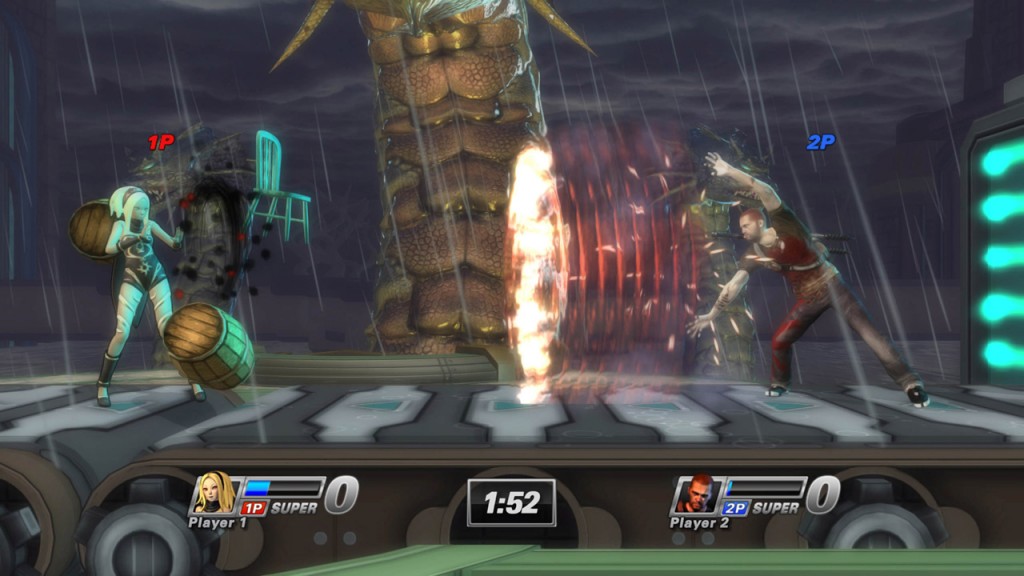 Besides being an incredibly fun multiplayer experience, Smash was successful because it united well known game characters from Nintendo’s legacy and put them all together in one game. Not many developers have a history of well-recognized characters big enough to pull off a successful crossover like Smash. All-Stars proudly showcases the PlayStation legacy in similar fashion. The 20 contenders in PlayStation All-Stars run the gamut of Sony’s long PlayStation history. It features popular characters from this current generation like Kratos (God of War) and Nathan Drake (Uncharted), characters that dominated the PS2 era (Jak & Daxter, Ratchet & Clank), and classic heroes that stir up nostalgic memories of the PS1 era, such as Parappa (Parappa the Rapper), and Spike (Ape Escape). Even characters you may have never heard about or remember fondly but never imagined would get another chance at relevancy take center stage with the rest of the cast; Sir Daniel Fortesque (Medievil) and Nariko (Heavenly Sword) come to mind. Third party contenders like Dante (DMC) and Big Daddy (Bioshock) are invited to Battle Royale, as well.

As someone who’s been a PlayStation fan since the 90’s and played just about every title these characters hail from, I can say that SuperBot has done a fantastic job at putting together an ensemble cast of iconic characters from different eras and genres. If the point was to please the masses and have enough diversity in the cast that any PlayStation fan, young or old, would find someone they love, then they’ve succeeded. Sure, there are some notable exceptions that fans clamored for (Crash Bandicoot, Spyro) but given that these are not Sony owned characters, it’s hard to blame SuperBot when they made it publicly known that they listened to the fans and tried, but when it comes to third party support, you have to take what you can get.

The 14 stages in the game also take a queue from PlayStation’s history by combining two completely different franchises and mashing them together in sometimes creative but mostly bizarre ways. Take for example the most recognizable stage from previous demos, Hades. It starts out as a simple God of War level with Hades wreaking havoc in the background. Soon after, Patapons show up to engage the God of the Underworld in combat. Hilarity ensues. Other mash-ups include Parappa the Rapper/Killzone, Jak & Daxter/Hot Shots Golf, and my personal favorite, LocoRoco mixed in with Metal Gear in a way that caught me by surprise and made me almost forget about my own battle to focus instead on the sheer nonsense taking place in the background (in a good way). All the levels in the game are pretty interactive and heavily affect fights with various changes to the arena. A level like Stowaways, which takes a scene straight out of Uncharted, starts out in a confined area but soon after the stage expands greatly, and Songbird (from the then unreleased BioShock: Infinite) brings the madness full circle as it starts attacking fighters on screen.

The core gameplay in this game, though, is what really separates it from Smash Bros as more of a fighter. The team at SuperBot has a history with fighting games, and it definitely shows when you start digging through the core mechanics of the game, crafting up new combos and strategies. No two characters play the same, so part of the fun is trying out the entire roster and find someone who fits your style. Attacks are mapped to the square, triangle, and circle buttons and each has a down, side, up and neutral attack. Couple that with air attacks and you have about 24 different types of moves that you have to work with and work into combos using the analog stick. The better you get at the game, the more you’ll realize how technical you have to be to perform well against skilled players. The strategies you’ll need to be victorious in a FFA match are drastically different than in a 2v2 match. But personally, 1v1 matches are where the game’s competitive edge truly shines. Blocking, rolling away, air-dodging, canceling your opponent’s supers and grabbing, all eventually play key roles and are necessary to come away victorious. At the helm of all this are the game’s supers, which as I mentioned before, are the only way to get a kill in the game, no matter what mode you’re playing in. You build up an AP meter when you perform attacks and after a certain amount of damage you have enough AP built up to perform a level 1 super or wait until you have enough for a level 2 or maybe even level 3. The decision of only killing via supers was a grave mistake and it will definitely turn off fans who don’t understand it. It takes some getting used to, but eventually you’ll start to get the hang of which supers are better to use and when, depending on the situation and environment. The more you play it, the more you’ll come to understand it, until you get tired of it and wished other options to win a match had been implemented.

The game has a lot to offer in terms of personal customization. As you play you’ll not only unlock titles and background art, you’ll also get different costumes, taunts, intros, outros, and even victory music for each character. On the negative side, while the menus are simple and easy to navigate, they’re just too bland and lackluster. The single-player campaign also leaves something to be desired in its presentation. Granted, story modes in fighting games seemingly have a tradition of being boring, quick and a way to unlock extra stuff. But for a game of this caliber, it could have been more than just still images with voice-overs for the characters during their story mode’s intro and ending. There are some fully animated cutscenes when each character runs into their rival but these are brief. That being said, the tutorials and trials are a nice single-player player addition and are challenging enough to offer adequate training.

PlayStation All-Stars definitely had a lot to prove, especially when being compared to one of the most recognizable and beloved franchises of all time. And it won’t truly reach the pinnacle of success it deserves unless it proves to gamers that it isn’t Smash Bros, but its own entity. Once you get over the comparison to Smash, and the concept of only getting kills with supers, you’ll see this game as something completely different. Overall, is it better than Smash Bros? Not at all. Is it a better fighter than Smash Bros? Perhaps. Is it a good game overall? Absolutely; and this is coming from a die hard Smash fan who’s spent hundreds of hours playing every iteration. If you’re a PlayStation fan, there’s no question, this game is a must-buy. And if you’re a PlayStation fan, it’s a good time to be proud of it. PlayStation has secured itself a solid legacy loved by many and SuperBot has done a fantastic job of celebrating it with a solid fighter and fun multiplayer experience that sadly may never become a full-fledged franchise.