Ori and the Blind Forest Review

Representing a different direction in the Xbox One’s fledgling collection is Ori and the Blind Forest, the retro-inspired 2D caper from Moon Studios hyped by Microsoft to be one of 2015’s major titles. With excellent all-round presentation and intense platforming, it’s definitely recommended, but be warned; the tale of this small cat-like creature packs more of a punch than you might expect.

Ori and The Blind Forest’s single player focus isn’t the only thing setting it aside from today’s mainstream gaming scene. It’s a Metroidvania game for one, wearing its classic platforming mechanics on its sleeve while brushing that sleeve within an inch of its life to provide some seriously pretty visuals. You control Ori, a white spirit creature tasked with saving the world after loss of his big cuddly guardian Naru (who looks a bit like a fat No-Face from Spirited Away). The bulk of the game’s quest is in restoring life to three separate spirit trees, all of which require you to defeat enemies, solve environmental puzzles, and use a myriad of abilities to navigate a series of increasingly challenging areas. Did I mention it was a Metroidvania game?

Like Castlevania: Symphony of the Night did with the original PlayStation, Ori’s creators have shown how you don’t need 3D to marvel at a game’s art design. Environments run the gamut from dark thorny forests to cavernous coves to temple ruins oozing rivers of lava from above. The depth of the background layers, impeccable lighting and an unwavering attention to detail make every nook and cranny a sight to behold. Ori’s tiny white body in the middle of the screen often make the environments feel brooding and dangerous. It’s like a watercolour painting that’s come to life and is now hell-bent on killing the scrawny spirit running through its layers.

Like Castlevania, Ori is really flipping hard. The game’s collection of critters may look like a cartoon, but from leaping spike pits to bouncing off enemy projectiles to reach the next ledge, Ori doesn’t just ask for precision but demands it. You start the game only being able to jump and attack enemy creatures with the help of spirit guide Sein, but soon enough there are more hazards on screen then there are safe places to stand, and you’ll be running, climbing and scrambling away from falls and foes galore. The game’s challenge is no more apparent than in its standout tree escape sequences, where everything you’ve learned is tested in daring upward chases that reward a single misstep with certain death. Intense? You bet.

Thankfully, Ori’s responsive controls mean that there are only a few moments that feel as though you needed precognition of the level to avoid a cheap death, although when they do come no controller is safe from mounting frustration. It’s a good frustration ultimately, one that makes you want to perfect your skills and is balanced out with the huge wave of satisfaction that comes with finally nailing a tricky section.

One of Ori’s more interesting features is its unique checkpoint system, which in any other game would be a bland affair but bears crucial importance in the Blind Forest. Rather than doling out regular save points, the player is given them as pickups to use whenever they like. At first, it feels like a limited quick-save feature, but it’s a mechanic that forces the player to think more strategically about the way they save. Poor use of checkpoints can leave you stuck without a save when you really need one, while a more measured use can alleviate some of the game’s more tricky stages. I found I only had myself to blame if I’d run out of checkpoints in a sticky situation, and it made for a much deeper challenge than many platformers nowadays which simply plonk the player back onto the last ledge you touched. 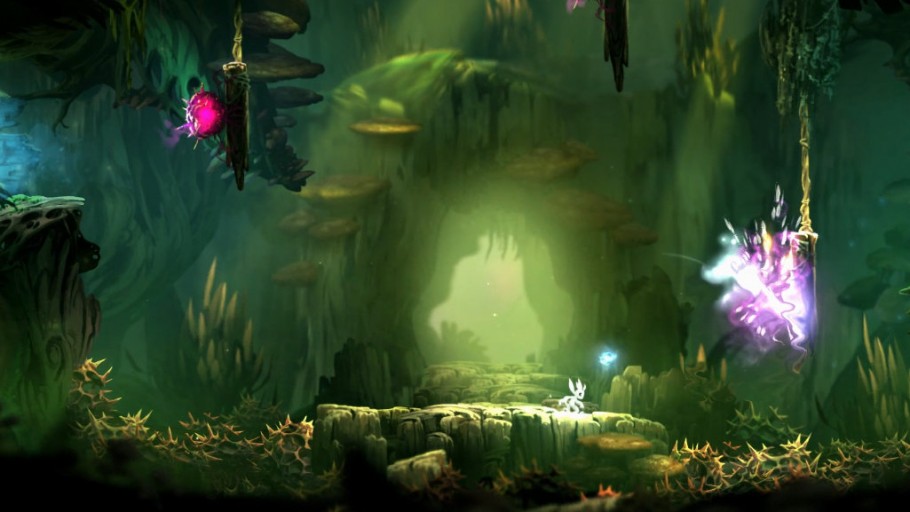 Regardless of ability, exploring the forest more thoroughly yields extra save slots and health boosts, and so it’s very much worth putting in the extra effort before trying to take on Ori’s very tough third act. Even without the incentive, a fully open and seamless world that develops and shifts throughout the game’s story – a volcanic eruption of water from the first spirit tree leads to a host of underwater excursions, for example – provides the perfect battleground to try not to die in.

If there’s any downside to Ori it’s the combat which, aside from a couple of abilities that double up as combat manoeuvres, mainly revolves around mashing the x button until monsters fall down. Given that enemies appear frequently and have varying attacks, it’s a shame your primary method of dealing with them feels weak and ineffective. You’re often better off firing enemy’s own projectiles at them using Ori’s signature jumping ability, which becomes vital in later stages of the game as you use it to bound from enemy to enemy in a terrifying game of monkey bars across large gaps. 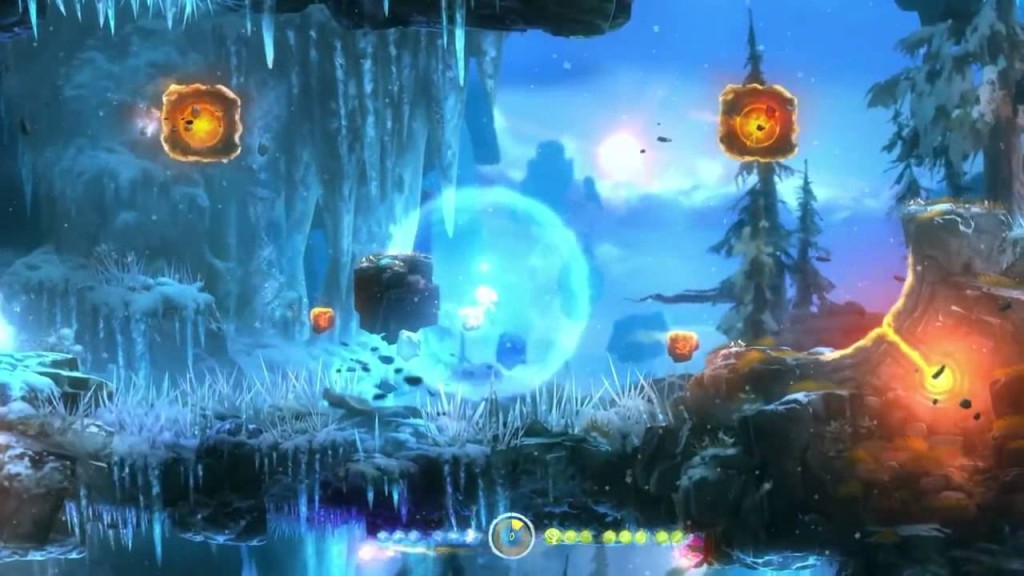 Nonetheless, Ori’s pacing is more than strong enough to keep you engaged throughout its ten-hour tale, even if the story’s eventual denouement might not entirely meet the expectation set in the game’s emotional opening sequence. The relative absence of the story afterwards, with only a handful of characters and a few major scenes, might not have been noticeable if not for this, but at least it’s a sacrifice that never hampers Ori’s otherwise excellent sense of game flow.

A helpful tip is that you’ll need to collect the game’s trinkets while you can, as much to the completionist’s dismay it’s not possible to return to your world save after the final credits have rolled. Nevertheless, Ori and the Blind Forest is one of those games to be savoured while it lasts. For Xbox owners who don’t need a platformer to hold their hand, Ori and the Blind Forest is well worth your time. As a way of harkening back to less forgiving games, it doesn’t get prettier, or more challenging, than this.