Get it? Don’t worry. It’s a bad mushroom pun that segues into a simple, short, and sometimes annoyingly difficult RTS game. Mushroom Wars is what it claims to be: a war of little mushroom people fighting for their little mushroom homes. When all is said and done, Mushroom Wars gives little replay value but offers a solid experience while it lasts. For its part, Mushroom Wars capitalizes on what it sets out to do.

Mushroom Wars is the story of a forgotten little flash animated mushroom man who must defend his home from the blue mushrooms and more. The first 20% of the game is spent on a breezy tutorial that lasts minutes, where you learn the basics of the game while utilizing a minimal amount of actual strategy. Soon thereafter, Mushroom Wars tosses you straight into the fire with little preparation. This is certainly okay, but I found myself failing multiple times on the 5th mission. And when I went to show a buddy how hard I failed, I finally beat it (thus discrediting my difficulty spiel). 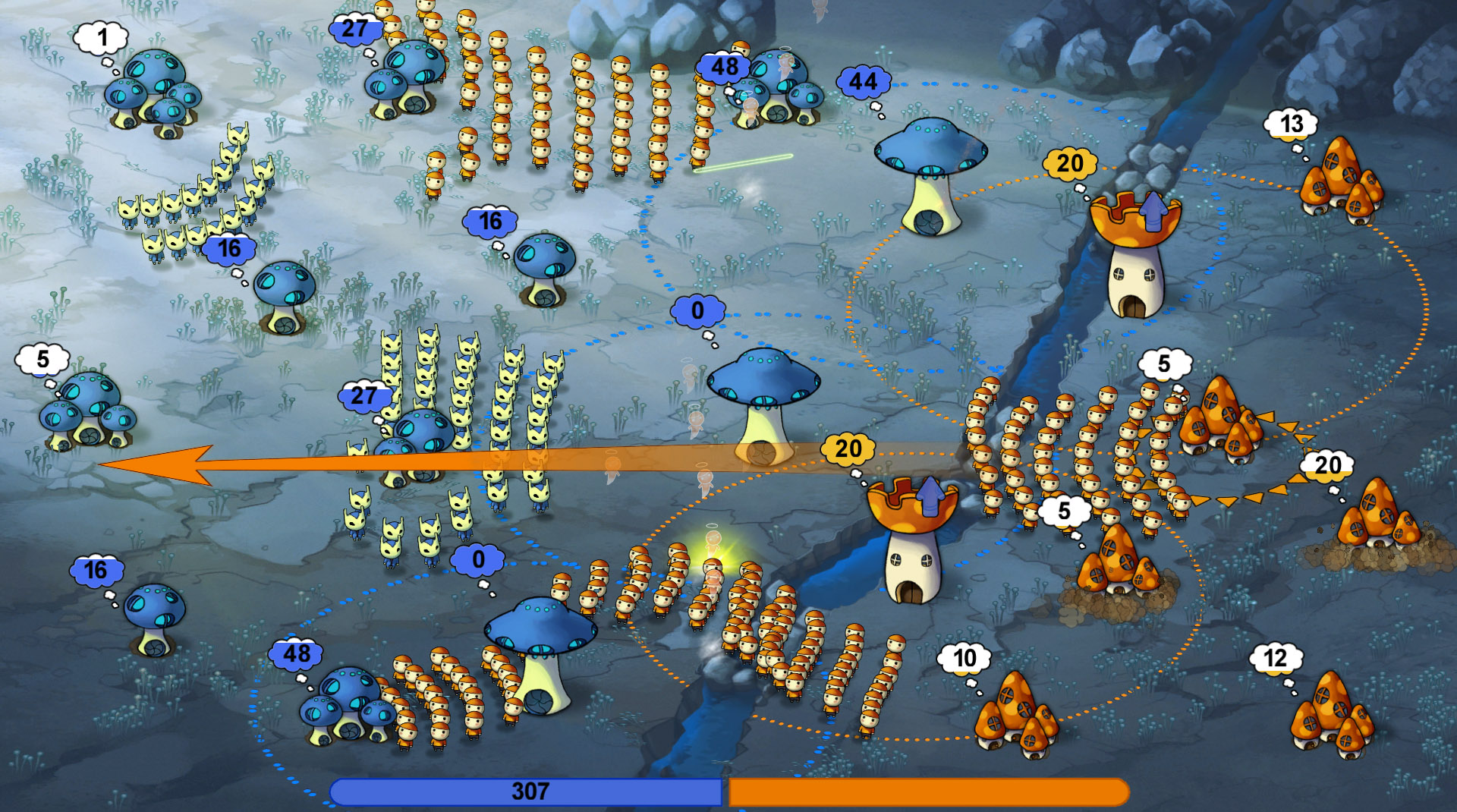 As you progress in the game, you begin to face more arduous foes and different objectives. Throughout the first quarter of the game, you must either commandeer all buildings or buildings marked with a star. As you continue, various objectives are included. For example, one mission requires you to capture all starred bases within three minutes. The inclusion of these differentiated objectives helps alleviate any staleness the game may provide, which is a welcome addition to a game like this.

Gameplay is rather simple in Mushroom Wars, but that doesn’t make the game easily. At the beginning of each stage, you are given a mushroom hut or huts and an objective. Your huts continue to produce mushrooms, and, at different intervals, you can upgrade the huts (for example, the base building can be upgraded at a 5 mushroom count and so on). You can command your mushroom folk to leave one hut and either attack an enemy hut or transfer to a different friendly hut. As the game progresses, a morale bar is included, which rises or falls based on your actions in the game (if you’re successful on offense or defense, for example, your morale will increase, thus making your units a bit stronger; likewise, if you sit idle or lose an attack/base, your morale will decrease). 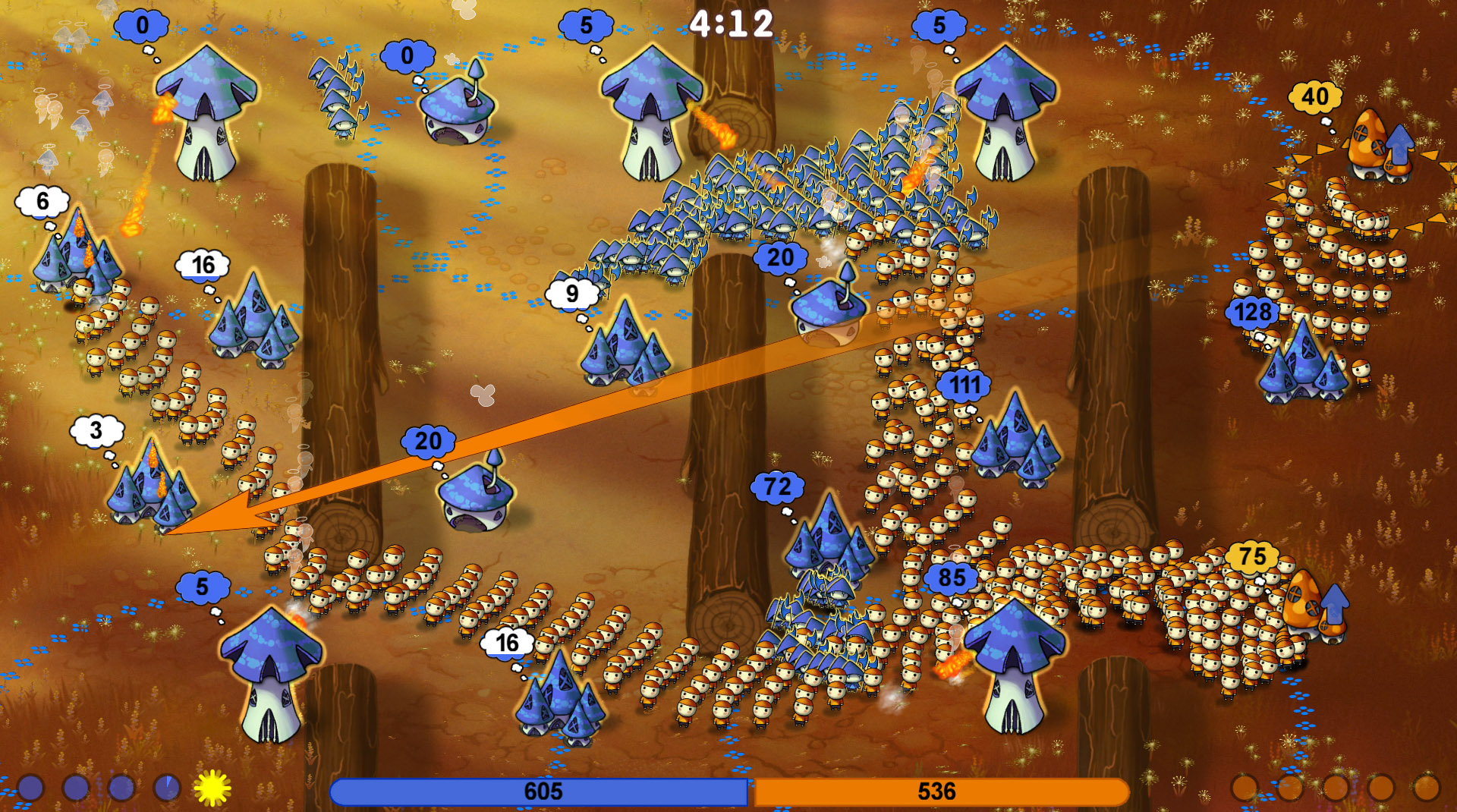 Outside of the short campaign mode, Mushroom Wars offers a skirmish and multiplayer mode. I was interested in the multiplayer mode, and I was actually able to find a game (after about a five-minute search). There aren’t many people who seem to own the game, so I can’t imagine the multiplayer will live very long. That said, the game I played was enjoyable, although I got manhandled pretty hard. The multiplayer and skirmish mode works similar to the campaign but without a narrative. You strive to commandeer all the starred bases before your opponent.

If there’s one thing I truly enjoyed about Mushroom Wars, it was its sublime soundtrack. I’m not sure what I expected going into such a colorful, RTS game, but I found the soundtrack a mixture of relaxing and soothing. The entire experience was a mixture of relaxing and soothing with its colorful presentation and cute, flash animated cinematics. With that said, however, I did find myself very frustrated and annoyed at myself for failing – especially because it almost always was my own fault. 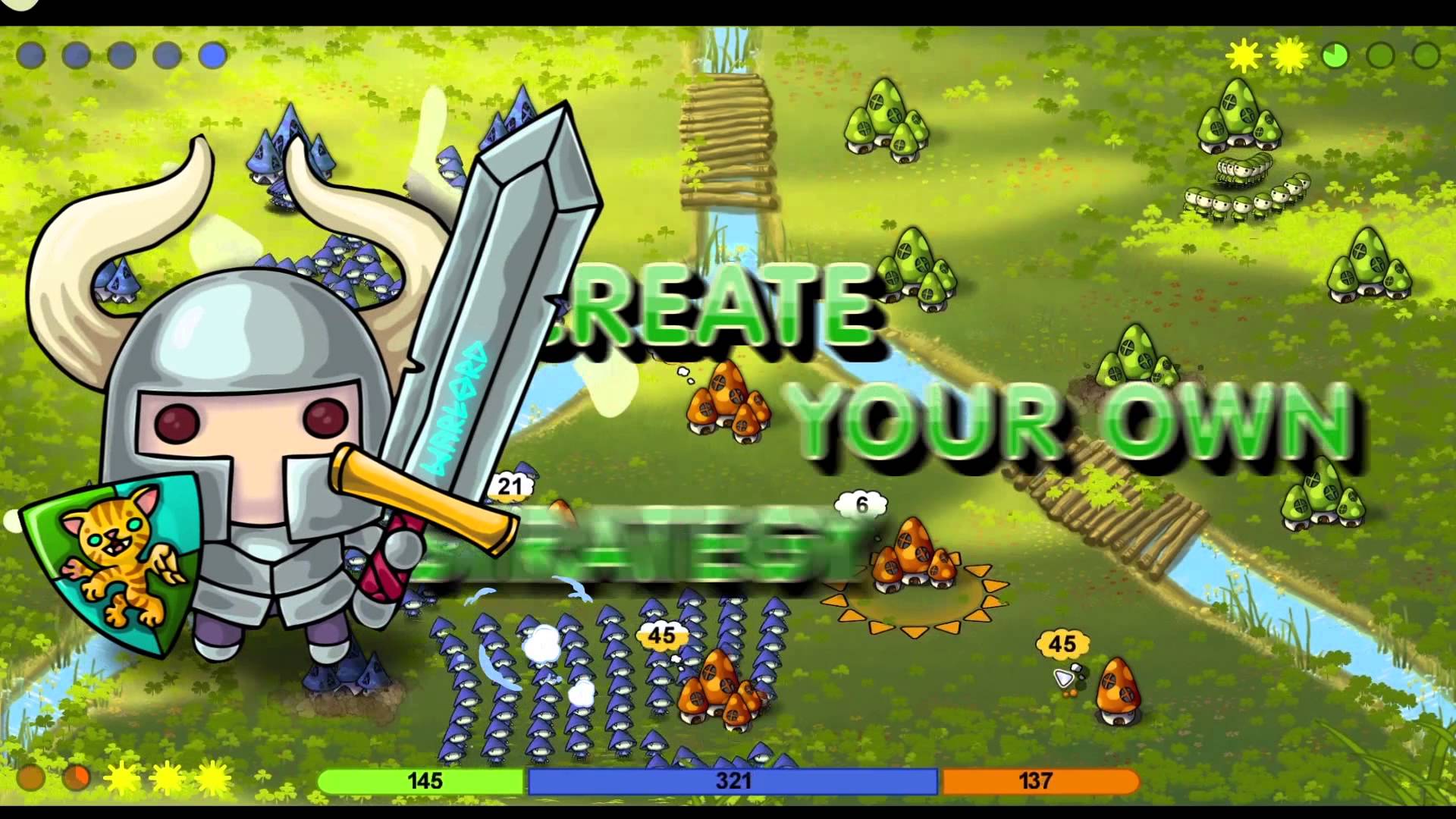 On the whole, Mushroom Wars is a cute and enjoyable RTS experience from indie developer Zillion Whales. For its $9.99 pricetag, the short campaign and inclusion of skirmishes/multiplayer is worth your time. Not being a terribly easy game, Mushroom Wars can usurp an afternoon – but not much more than that. Still, if you can grab it up for $7.99 on the Steam Summer Sale, it’s not a bad buy.