A battle for the future

The end of the Metal Gear Solid series has finally reached us. Metal Gear Solid V: The Phantom Pain has released after much anticipation and brings a massive amount of new gameplay and narrative twists to the 28 year old series. With the controversy surrounding Hideo Kojima leaving Konami and the company going through a change in its game development philosophies, it is unlikely we will ever see another entry into the series. Even if another was produced, Kojima would not be a part of it and numerous fans such as myself would not want to see a Metal Gear world without Mr. Kojima.

Kojima has crafted a final story in an entry located in the center of his long spanning series’ narrative. This is still a stealth-action game, but has shifted away from the old, linear, narrative and gameplay. Players are now presented with an open world to explore and are provided numerous objectives to be completed within. You’re once again given control of Big Boss, now with the codename Punished “Venom” Snake, and he is seeking revenge on the people who wronged him during Metal Gear Solid V: Ground Zeroes. 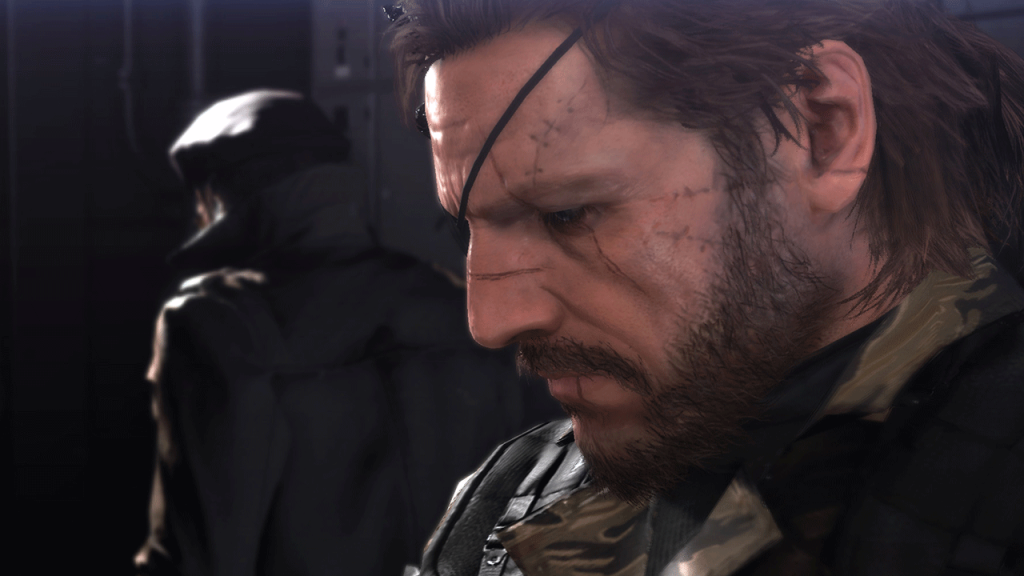 Those who played MGSV:GZ got a taste of the controls for this entry, but the gameplay is far deeper with the addition of gadgets, buddies and numerous other items and abilities at the player’s disposal. Controls are some of the tightest and responsive not only in the Metal Gear series but also in the current generation. I felt that I had complete control over Snake and could react and respond on the battlefield with the combat awareness a legendary super soldier should have in his arsenal. Examples of this deep gameplay system are fully up to the players acquainted styles.

A specific example of this was a night mission in which you have to rescue kidnapped intel team members. I had placed Quiet, the Sniper buddy, on a high cliff overlooking the base to scout for targets. She marked a majority of the enemies on the base as well as the intel team member, allowing me to skip having to find intel or interrogate an enemy. I snuck up to where he was located and eliminated the guards with a mix of silenced weapon fire. After sneaking him away and needing a helicopter for evac, I snuck back into the base and placed C4 on the power supply and anti air defenses. I then gave Quiet the word to open fire and as she sniped away soldiers, I triggered the explosives, then pulled out my sniper rifle after calling in a pick up. We evaced out and I completed the mission in my own fashion. There were dozens of other ways to do it but everyone will have a unique feel to their experience. 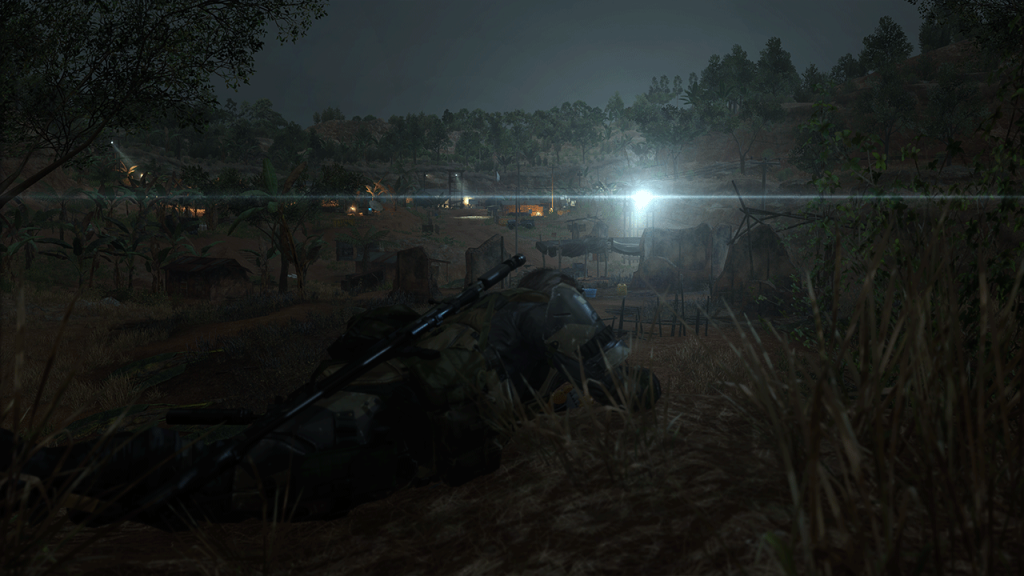 The other major element to The Phantom Pain’s gameplay is developing Mother Base and growing Diamond Dogs into a functional army. Using the iDroid, the player can develop weapons, tools, and items for Big Boss, his buddies, and other soldiers. Additionally, Mother Base itself can have new platforms developed and upgraded. These platforms increase the size cap for Diamond Dogs’ several departments and increase the various rewards each department provides to the cause. The development system is extremely deep and rewarding. Every time I had a chance and the correct amount of money/supplies, I was in my iDroid crafting weapons and and upgrading Mother Base. The “ding” I would hear, followed by the voice of the iDroid informing me I had completed a project, just kept me wanting to make more. I do find that it will take quite a while to reach all of these development goals and some projects show up late through the natural progression of the game. I came across story missions requiring an rpg, but my staff had not unlocked the projects yet that would give me the needed weapon. This could result in a grindfest for some completionists.

When it comes to the narrative, the newest entry will be jarring to Metal Gear fans looking forward to a deep story. Additionally, newcomers to the series who did not play Peace Walker of Ground Zeroes will find themselves lost. There is still story but it is condensed to occasional cutscenes and the audio tapes snake receives during the campaign. The story opens up towards the end of the campaign and even more in the post game content. You will get almost all of the narrative evaluation from Ocelot, now voiced by Troy Baker, and Kaz with the occasional contribution from Snake himself. Bringing Keifer on in MGSV: GZ was an odd choice that fans found hard to accept. His performance in TPP is pretty solid when he gets a chance to talk, but that is rare. I will keep from divulging any narrative plot points as a lot goes on in the story when they get a chance to exclamate more on it. 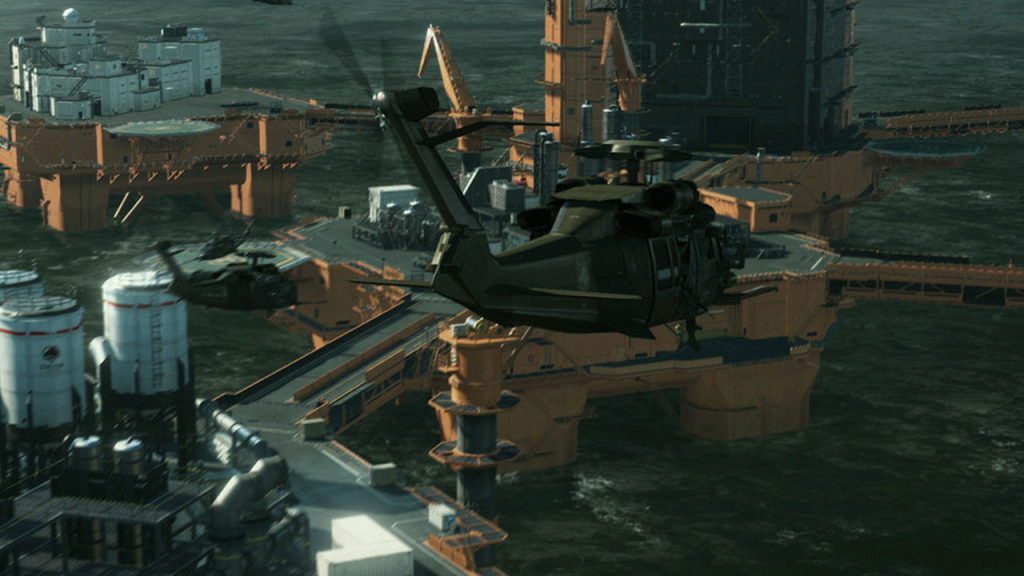 The sounds of the game are a star all on their own. The score here is different from the other entries into the series, but still holds it’s own. Quiet’s theme, sticks out to me from the original content created. The real shining aspect is the inclusion of an 80s soundtrack. Finding the audio tapes hidden throughout the world, you are able to listen to these whenever with your iDroid. Going on a rampage to take over a stronghold while listening to “Kids in America” by Kim Wilde is a moment no other game can replicate. The soundtrack also includes contributions from David Bowie, The Doors, Bruce Springsteen and more. You can tell Kojima has an appreciation for the musical style of the 80s. I would consider this soundtrack quality up there with games in the Grand Theft Auto series.

There is so much to do in this game and even at my 45 hour playthrough, I only hit 40% on the counter. The online play via Forward Operating Base has been under heavy maintenance and I have yet to fully delve into it but I can see it adding even more content to an already beefy game. Despite the inclusion of microtransactions when it comes to expanding the scope of your FOB, there will be a plenty to do with your first one, building it up and constructing defenses to avoid invasions by enemies. With the option to replay certain missions with increased difficulty and well over 100 side ops to play, there is enough content to last well over 60 hours or more.

While the game has it’s flaws for someone who is a major fan of the Metal Gear lore, it is an incredible offering that gives so much power to the player and encourages creativity on how you complete the goals presented to you. There is so much attention to detail in this game and it is apparent that Kojima, along with his staff, put all of their time and effort into crafting this masterpiece. I hope for the best not only for the series, but also for all of the staff affected by the controversies surrounding the game. If this is the final time we will fight with Snake, then it truly is a special way to leave it.

Metal Gear Solid V: The Phantom Pain Review
Incredible open world that can be tackled however the player decidesIncredible attention to detail.Amazing and diverse soundtrack
Lack of story during most of the gameSilent Big BossMay be hard for newcomers to Metal Gear
97%PS4
Presentation92%
Gameplay100%
Visuals100%
Sound100%
Value93%
Reader Rating 1 Vote
100%