A battle of saboteurs

When the premise of INSIDIA was brought to my attention, I knew I had to try it. I grew up a huge fan of the RTS genre, pouring my heart and soul into games like Star Craft and SRPGs like Final Fantasy Tactics. There’s something about the chess-like proposition of facing off against another player, dueling it out to see who the better strategist was. INSIDIA, in theory, fits that bill perfectly, and it’s an experience well worth having.

INSIDIA is a timed RTS styled in a fashion after games like X-Com. The concept is pretty simple: destroy the shields of your enemy’s base and sabotage their command center. Before each battle, you choose your team setup from a cast of about ten characters, each with a variety of skills. Each character falls under a certain class: Tank, fighter, assassin, or support. As each class suggests, the power, defense, and abilities cater to each character. For example, Naima, the sniper, deals significant damage with her special and solid damage with her overwatch ability, whereas the Gunther, the tank, maintains a massive 11 HP but deals little damage (in response to an attack) and can pull enemies close to him while rooting them in place. Each character possesses unique abilities, so playing around with them to create a team that works for you is a lot of fun and gives the experience greater value.

Combat is where the game finds complexity. In your standard PvP match, you and your opponent make your moves simultaneously before a timer runs out (if you don’t touch your characters during that timer, you won’t get a move in). After the time expires, you and your opponent’s characters move into their designated positions and/or engage in combat. As a rule, characters get to move before anyone executes an actual combat command, so if you plan properly, it is possible for you to dodge attacks. Of course, the opposite is true, too; you could inadvertently run a character to his/her demise because of poor planning or purely bad luck.

In order to sabotage your enemy’s base camp, you must disable at least one segment of his/her shields. To do so, you have two options: either kill enough of your enemy’s characters (each time a character responds, you deal damage to the enemy’s shields) or hold your character(s) long enough on the center cross platform, launching huge attacks on the opposing shields (each attack will completely destroy a shield segment). Once at least one segment is destroyed, you need to move a character into the base and sabotage the command center (you do this by moving your character onto the designating pad and clicking the assigned sabotage button). If desperate, the enemy can and should plan for this, so you’ll have to strategize your way around potential barriers. 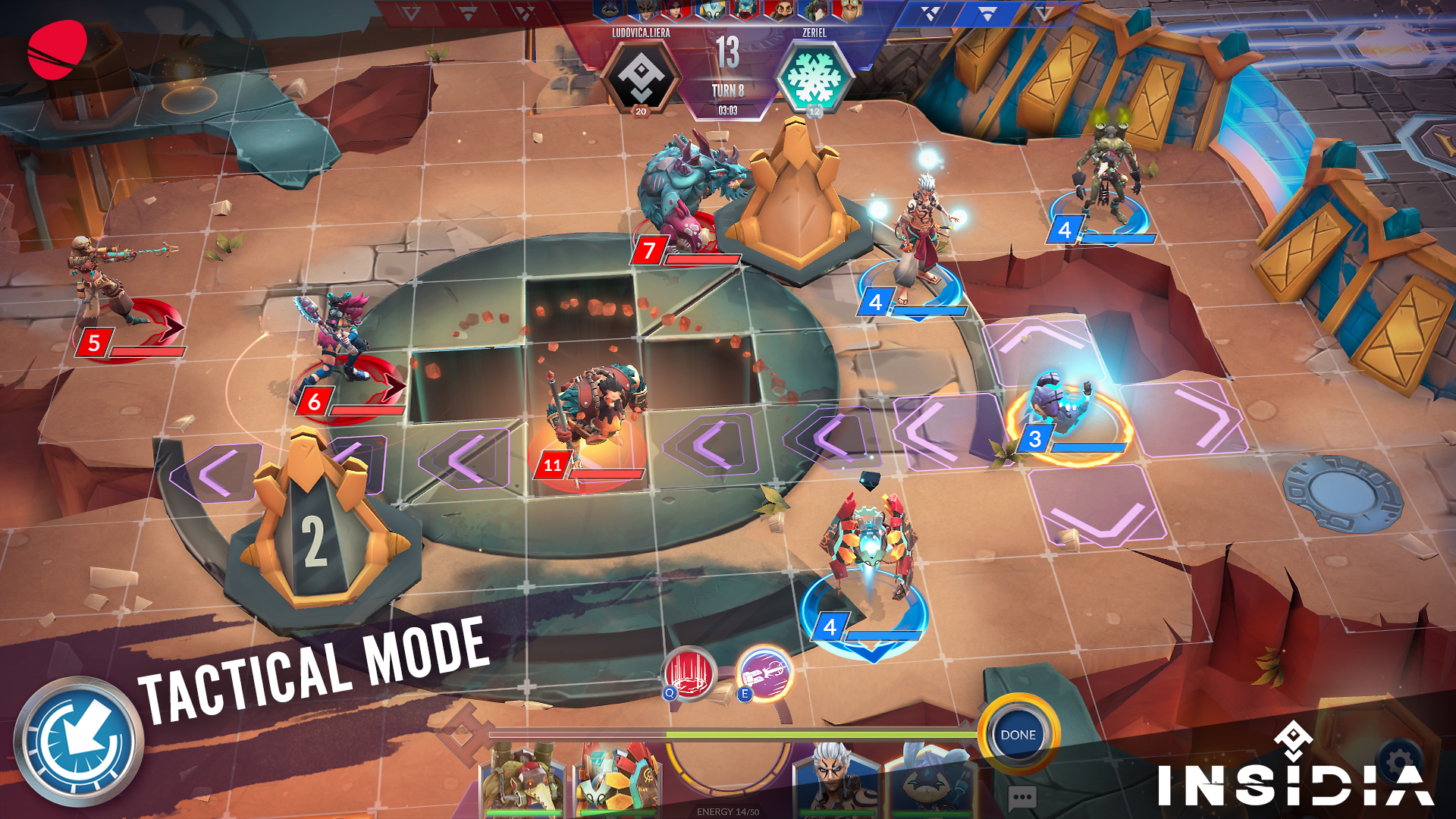 My biggest concern, as always with indie games, is whether I will find people to do battle with online. While the offline modes against the computer are great for testing party combinations and learning the game, the real fun comes against other players. Fortunately, I managed to find a number of opponents with a wait time that ranged from 15 second to about a minute and a half. All things considered, that’s not too shabby (too often I’ve played indie games that offered an online mode which no one played). My time in PvP came back a split – I hold a 50% win rate. Both my wins and losses were pretty close, and a few could have gone either way toward the end. In all, the matches seemed balanced and truly up to the whims of each player.

If you’re considering investing in INSIDIA, I do recommend giving it a shot. If you’re not prepared to purchase the founder’s edition, then you’re in for a treat – the game itself is free-to-play. Of course, micro transactions do exist (you can buy crystals that unlock some pretty spectacular costumes for each character), but they’re hardly necessary. Should you enjoy the game, the founder’s pack unlocks all the characters and provides some founders only perks (like exclusive costumes, icons, and titles). Truly, INSIDIA is an ambitious title from indie developer Bad Seed, particularly for its aim to swing in to the eSports arena. If you’re a fan of the RTS genre, especially games like X-Com, then INSIDIA is well worth your time. Give it a few rounds to get comfortable, and definitely play the tutorial, as, once you’re invested, it’s a game that can consume quite a bit of your time.