Teaching isn’t easy. You’re evaluated based on how your students perform on standardized tests and an unusual administration evaluation system—at least in Ohio. To be effective, you may also have to deal with students who don’t really want to be in your class or school. Worse yet, if your school district is struggling for funds, you never know if your name will end up on the RIF (Reduction In Force) list. For some, senior pranks can spell inevitable disaster. The latter half of these is what Charlie Day’s Andy Campbell and Ice Cube’s Strickland have to face in Fist Fight.

At least, that’s the underlying principle of Fist Fight. Realistically, the movie pits Campbell and Strickland at odds with each other after Strickland, the butt end of a senior prank, destroys a student’s desk with a fire axe. Confronted by the administrator, Campbell eventually breaks and blames Strickland for the action—saving his own job and dooming Strickland. Of course, Campbell has a family with a baby on the way (his second child), so he feels justified in his actions. Strickland, however, declares that, after school, he and Campbell will take to fisticuffs to settle their differences. 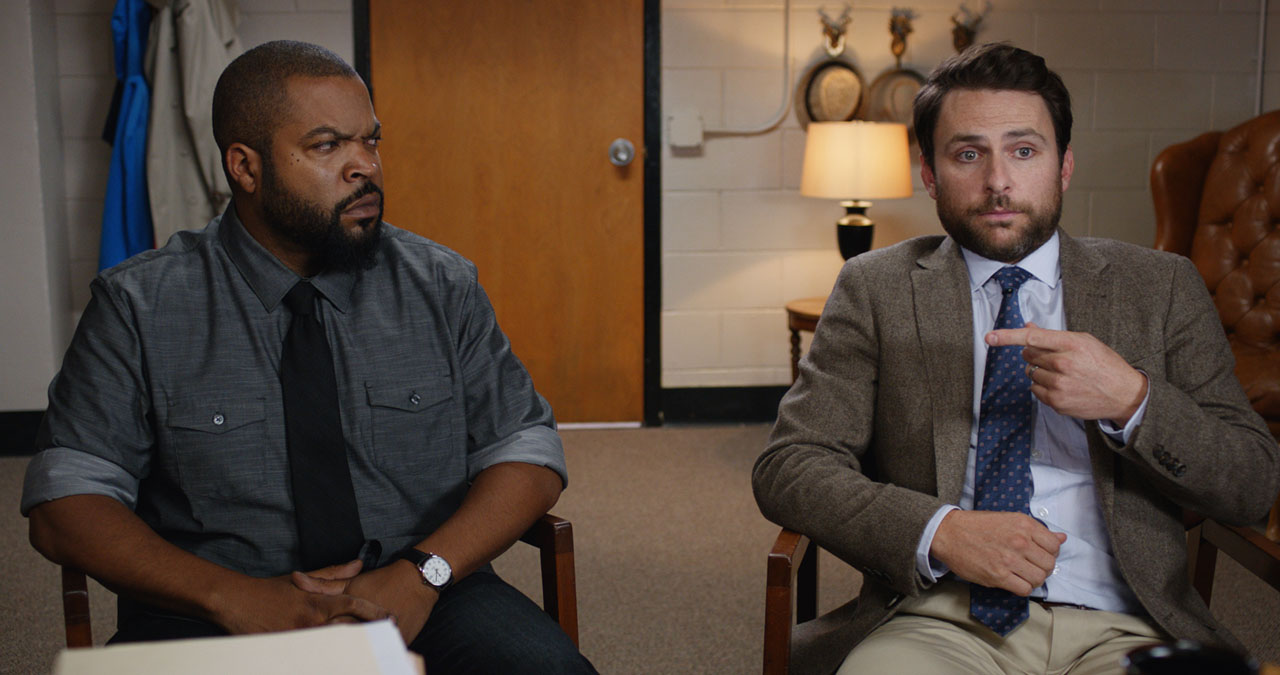 From that moment on, Campbell, well aware he can’t possibly win a fight against Strickland, begins to plot various ways to thwart his foe before the battle ever begins. Throughout the course of the film, Day performs as he is known for: high pitched squawks, exaggerated speaking and motions, and hilarity. You see, there probably aren’t many actors who could portray Andy Campbell the way Day can, and, likewise, Ice Cube delivers a performance that proves his handle for comedy. The two are stark opposites of each other, and that works to near perfection in the film.

Before critiquing the remainder of the film, it is necessary to acknowledge that 95% of this film could never actually happen. There is almost nothing steeped in realism here, even though the film tries to pass it off as such, and perhaps, as a teacher myself, this is part of the reason why I enjoyed the film so much. Despite the abhorrent flaws in the execution of school life in Fist Fight, the idea behind the fight and Campbell’s mini-monologue toward the end of the film sum up the struggle of teachers, which is something I feel too many movie goers may miss.

Laughs in Fist Fight assail the viewer in many forms, and while some may be cheap gimmicks, the cast delivers at nearly every moment. Day and Cube shine, for sure, but Jillian Bell (the school counselor), Kumail Nanjiani (the school’s lone security guard), and Tracy Morgan (the gym teacher and coach) are, at every step, on point with the leads. The point of view comedies like Fist Fight or, say, Neighbors 2 take is one opposite of most films or news stories. One quip from a character talks about sex scandals involving teachers and how the news never covers the “good parts”.

To fully appreciate Fist Fight, I think, one needs to be wary of the state of modern society. Why do we find the things we find offensive, and why are we not allowed to speak about any number of ideas? From reviews I’ve read, critics decry that Fist Fight harms the view of public education, but I argue to the contrary. I’ve worked in schools filled with security guards, metal detectors, and dangerous kids. I’ve worked in districts where money is an issue, and our jobs were never secure. I’ve also worked in wonderful districts where every day was a joy, and I’ve worked in districts that communities have no desire to support. The truth is reflected in Campbell’s monologue near the end of the film, and it’s one that I breathed a sigh of relief because, even though it’s smack dab in the middle of a raunchy comedy, somebody said it.

In conclusion, it isn’t often that I find a comedy scenario involving education that makes me simultaneously laugh and tear up, something that I found disgustingly funny and oddly touching. The acting on all accounts was superb, with Charlie Day and Ice Cube shining, and the delivery of comedic moments hit—at least for me. Certainly, Fist Fight isn’t a film for everyone—especially in today’s culture—but it’s a film that directly targets the idea of bullying and the state of education in a satirical form that succeeds.