Euro Truck Simulator 2 Might be the Best Game Ever Made

In Euro Truck Simulator 2, you can be whoever you want to be, as long as you want to be a truck diver. And that might just be the most freeing experience I’ve ever had in a video game.

I’ve never trucked, nor have I ever had any desire to truck. I can’t even use ‘truck’ as a verb in a convincing manner. I’ve never seen cult American show Convoy, though I can hum the tune, so maybe I’m not a complete lost cause. Perhaps most fundamentally, I can’t drive at all and have only the most fleeting understanding of the highway code. (Traffic lights, stop signs, and the whole ‘not running people over’ thing are all particular strengths.)

So why is it that over the Christmas period—a time which, as we all know, is devoted to gaming, drinking, and, more recently, avoiding Brexit discussions with the grandparents—I’ve developed such a fondness for the pedal-not-even-close-to-the-mettle humdrum of Euro Truck Simulator 2?

I love car games. If your game has a car, a racetrack, and, preferably, a delicious alt-rock soundtrack, then I am all in. That began all the way back with Gran Turismo 3 A-Spec. I still have no idea what A-Spec stands for, but my best guess would be ‘Awesome Super Petrolly Exhausty Cars’. But that’s by the by. 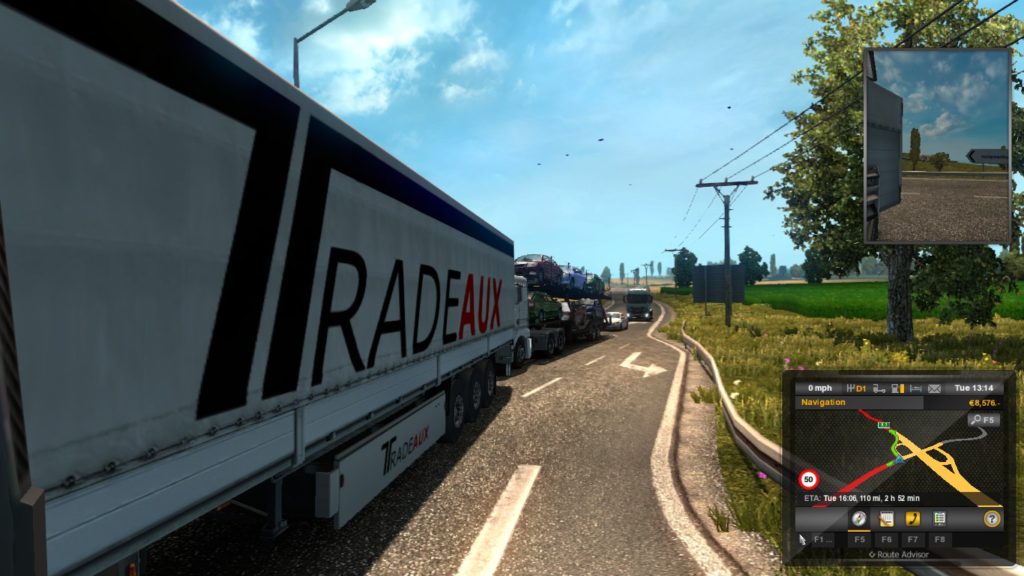 The urge that Gran Turismo instilled in me—or, at least, what I thought was the urge it instilled in me—was to drive really, really fast in really cool looking cars with really great music. Words to that effect I wrote as a 12 year old in a review which still haunts me to this day as one which took use of ‘really’ to unfathomable excesses. I became a digital petrolhead, breathing the heady diesel vapours and rocking out to Just a Day by Feeder.

And thankfully for me, video games were more than happy to cater to this particular taste. Game after game, each more climactic and adrenaline-fueled than the last, was released, from the hyper-realism of Forza to the insanity of Burnout to the more unconventional and under-appreciated Mario Kart-eque escapades of Blur.

Open-world games like Grand Theft Auto and Saint’s Row, at least before Saint’s Row eschewed vehicles in favour of repeatedly and explicitly jumping the shark, also put paid to any notion of careful, considered driving. Sure, you could follow the rules of the road, but no-one will thank you for it, least of all the game itself. For me, manic dashes across heavily-populated streets, with the vehicle swerving pell-mell all over the pavement, became the norm, the baseline, especially without the leveler of real-life driving, in which ‘hit and run’ is not seen as awesome. It’s generally positioned way, way below awesome.

When something becomes the norm, there grows a clamour for the alternative. Just ask America, who were so perturbed by the idea of a steady hand in the White House that they opted for the human equivalent of irritable bowel syndrome instead.

So it came to pass that I wanted something a little less than a bazillion horsepower. And, my God, how Euro Truck Simulator 2 fits the bill. 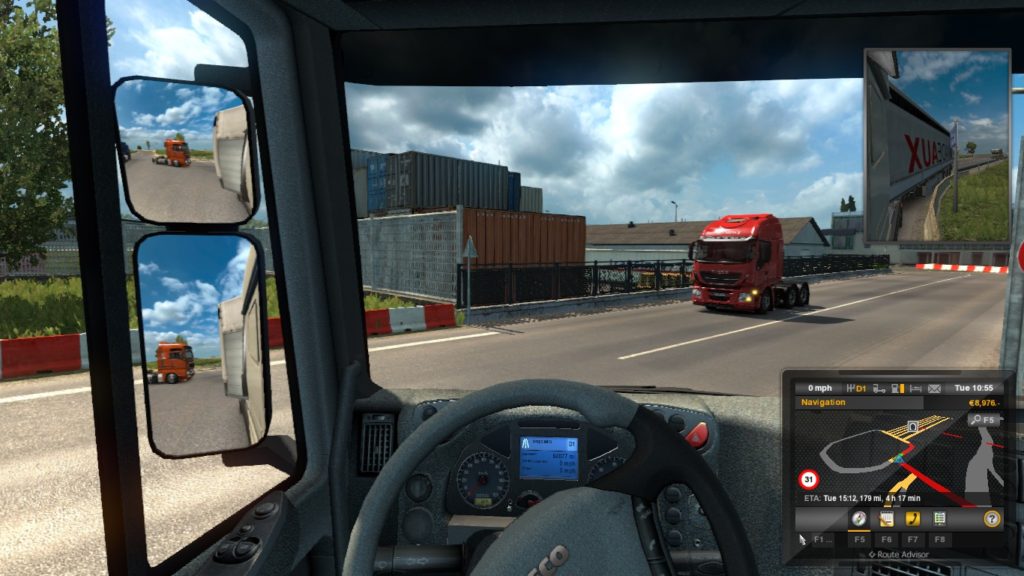 In it, one must deliver a certain cargo to a certain place, leaving you to fill in the details howsoever you wish. For instance, my trucking company, ‘Socialist Revolution Inc.’, distributes left-wing literature to the denizens of Dover, Felixstowe and all the other rural conservative places where the spark of a popular uprising could not be less forthcoming. My portrait is that of an elderly lady who also happens to be a relentless left-wing firebrand.

Beyond preaching to the dispossessed proletariat, all that’s left is you, your truck and a few hundred miles of open road.

You start as a freelance trucker, owning precisely no trucks but a whole lot of enthusiasm – so much so that you are able to travel anywhere at the drop of a hat on the mere mention of trucking. Accept the cargo, leave the site, remember a bit too late that continental Europe drives on the right hand side of the road, flick up two fingers at a sing reading ‘Brussels’ in a flourish of post-Brexit xenophobia and not only are you mastering trucks, but you’re also on your way to becoming a fully-fledged Brit.

There are so many individual elements, so many tiny moments to love in this beautiful game. First and foremost is the Skyrim approach to exploration. Imagine my glee when, upon disembarking from the channel tunnel and burning some rubber (As far as someone can burn rubber at 25 miles per hour. Lightly sautee some rubber, perhaps.) on England’s green and pleasant land, the following words appeared on the screen: 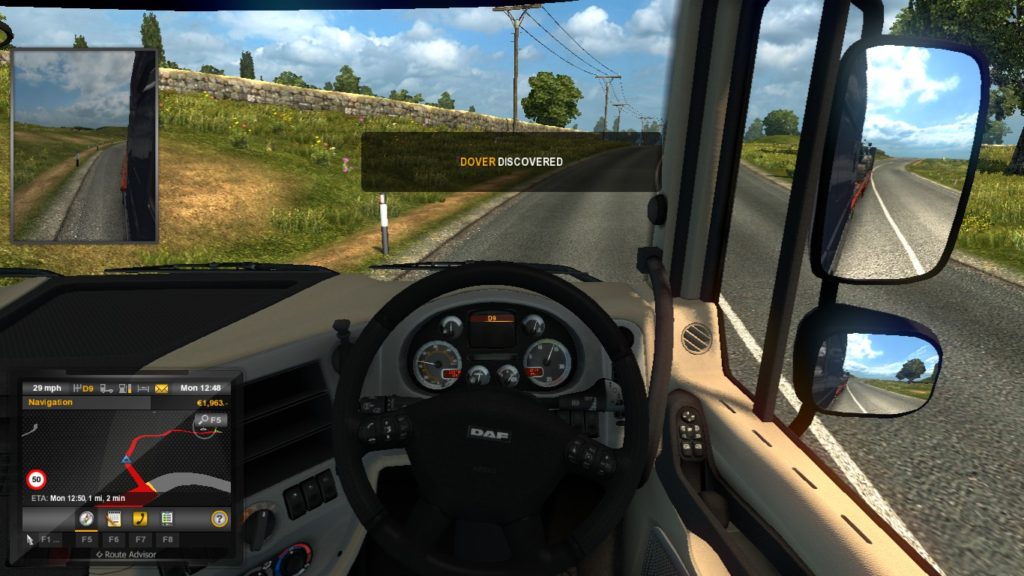 In all of it’s size 12 Times New Roman glory, it shone like a dismal, ill-maintained, unnecessary beacon. For those not in the know, Dover’s not really the sort of place one ‘discovers’. Generally, it’s the sort of place one ‘avoids’. It has nice cliffs, sure, but when your one redeeming feature is a sheer rock face, you’re not on to a winner. It was so beautifully incongruous and unceremonious that I couldn’t help but be awed.

The other AI drivers are a blast, too. Blank expressionless faces act as the perfect counterpoint to the Brownian motion of your vehicle. Never was this so keenly brought into focus as when I blocked a junction leading out of the M5. Noting that quite a line has built up behind me, I stuck my head out of the window. (I say head, but the animation would suggest that I actually lifted my entire torso out of the driver’s window, clutching the steering wheel with my feet to stop myself from falling out.)

Upon shifting my gaze from the dashboard to the outside world, I was struck by the most withering look I had ever received, and physically recoiled. 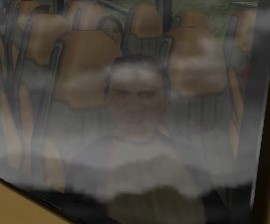 That man, looking as he did like the lovechild of Sir Anthony Hopkins, Moe from The Simpsons and a fuckton of pure spite, made me re-evaluate. I drove on, trying not to cause a scene because that wasn’t the person I wanted to be. I drove on because that was the right thing to do.

That’s the great thing about Euro Truck Simulator: it’s a simulation of so much more than trucking. It’s a game which expects so little, yet invites so much.

By truly capturing the intense, transcendental banality of medium-speed cross-continent haulage, Euro Truck Simulator creates a blank canvas between you and the game.

To a game that asks us to do almost nothing, we respond with more than we ever thought likely, ever thought capable.

When met with a medium which allows us to be whatever we want to be—pirate, ninja, ninja-pirate, and many other things—it takes a special kind of game that says “Hey, wanna do an actual job that people literally do and isn’t in the least bit exciting?”

And you know what?