Let’s face it, now is not a good time to be a clown. After an autumn filled with creepy and sometimes violent encounters with masked weapon-wielding Bozos, people are more put off than ever by the sight of a big red nose, colorful hair, and floppy shoes, but perhaps not all clowns are made equal. No, this review is not a part of the Clown Lives Matter movement. It’s the preliminary piece of the Dropsy Is Important and Should Be Protected at All Costs movement. (I’m still working on the name.)

Who is Dropsy? Let me tell you.

Dropsy is a clown. You probably didn’t need me to tell you that. He’s also kind of scary looking at first glance. The hallucinogenic, pastel graphic style of his self-titled game is a trip; not only does it capture the saccharine innocence of our hero, but it also just as easily morphs into the nightmare cavity-sharp landscapes that jolt players into action and fuel their mission to break the binds of prejudice weighing Dropsy down. 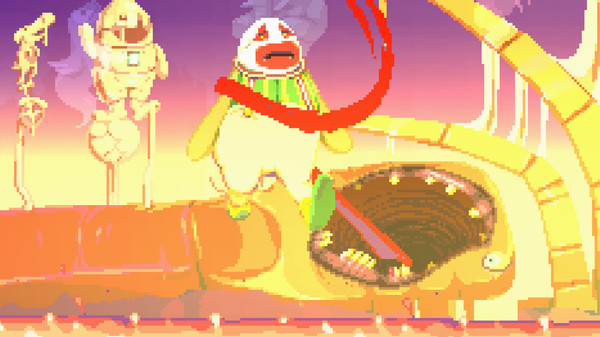 Dropsy started off working in a circus. People loved him and he loved them. Making children squeal with delight and even the most reluctant adult cracking a smile was what filled his heart with the most joy. Everything in Dropsy’s life was simple, genuine, and good—but then there was the fire.

The fire that not only killed his mother, but also transformed the way people would see Dropsy for a very long time to come. Murderer, they said. It was on the news. It was shouted without words in the dirty looks he got on the street. It was felt, like the pierce of a knife, every time he approached someone and they fled in horror. Some screamed. Some got angry. Some cried. Everyone always left.

All Dropsy wanted to do was make people happy, but for reasons beyond his control, the world hated him. He didn’t ask for the fire to occur, but it did, and he wouldn’t have taken the blame for it if it hadn’t already been thrust upon him, but it has. So Dropsy walks around as the town monster, but the hate hasn’t reshaped his heart. Dropsy still wants to make a difference; he wants to make people smile again.

So that’s what he sets out to do in his eponymous game, developed by indie studio Tendershoot and released by Developer Digital September 10, 2015. The game play is relatively simple; you explore Dropsy’s world through basic point-and-click maneuvers reminiscent of the late 90s PC titles that were definitive of so many wildly popular childhood titles like Putt-Putt and Pajama Sam.

A Game Beyond Looks and Music 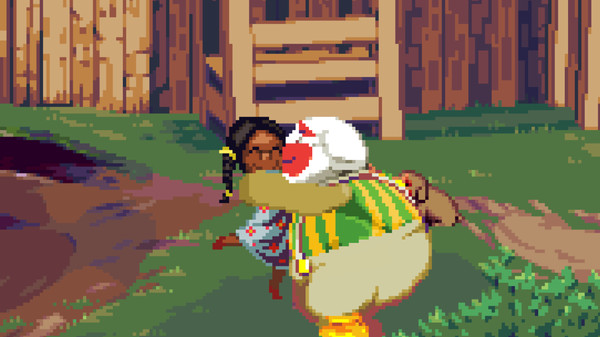 There isn’t much to explain in terms of mechanics, which is a good thing, because Dropsy is all about its story. Assuming the role of a misjudged clown, your task is to defeat his personal demons and the intolerance of a world that doesn’t understand him through love.

Your entire goal throughout this game is to make people happy. It’s such an oversimplified task that it actually becomes a challenge, especially when you take into account the fact most people who lay eyes on Dropsy either scream at him, burst into tears, or flee in terror, not that I can blame some of them. Dropsy does LOOK pretty creepy with his runny stage makeup, ill-fitted costume, and yellowed teeth, but beneath his deranged exterior, there lies a warm and compassionate heart.

“There is still a lot of good in the world despite its pervasive evil, but you have to be willing to find it. Or dare to be it.”

In this dichotomy lies the essence of the entire game. There is still a lot of good in the world despite its pervasive evil, but you have to be willing to find it—or dare to be it.

If you really want to get down to the nitty-gritty, then here’s what you should know about Dropsy: the graphics are really bright, sometimes overly saturated, and yeah, they can hurt your eyes, but when you realize that they’re all part of a greater message (the stark contrast between a vivid environment and a dark world within it), you learn to appreciate it. 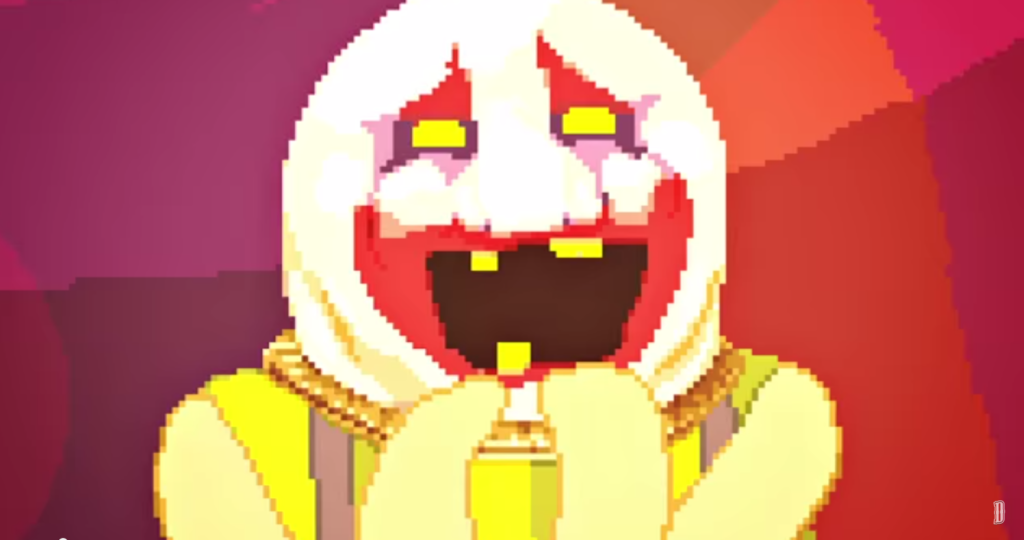 The actual game play is simple, but it can be confusing. I’m someone who likes to have active engagement through text and dialogue. Dropsy has none, and while that does emphasize the game’s deeper meaning, it also left me clueless and, at times, frustrated. There aren’t even any titles on the menu buttons, so you have to pay extra attention just to save and quit.

Despite its lack of dialogue or textual assistance, Dropsy is one of the most unexpectedly profound and unique titles I’ve had the pleasure of playing. You can pick it up on Steam for $9.99.

Dropsy Review
Bright, unique designInstantly lovable character Strong message about the importance of tolerance and love that can be interpreted as heavily or minimally as player desires
Without any dialogue or text prompts, figuring out exactly where to go and how to solve certain issues was challenging.
92%Overall Score
Presentation95%
Gameplay85%
Visuals95%
Sound90%
Value95%
Reader Rating 0 Votes
0%