Enhanced and in 4K

What do you get when you mix maximum masculinity, foul language, badassery, and guns? That’s the question People Can Fly asked when they released Bulletstorm in 2017. The result was maddeningly quick gameplay, hilarious, brutal, and tough skillshots, and dialogue that would make even Carlin blush. A critical success but commercial flop, Bulletstorm lingered in slow death until Gearbox acquired publishing rights. And so, earlier this month, Gearbox Publishing released a new and improved Bulletstorm: Full Clip Edition with 4K visuals and the inclusion of the infamous Duke Nukem – meaning the original formula was ratcheted up a notch.

For those too young to remember, Bulletstorm was a glorious exhibition in smooth gunplay and silly antics that required skill to master and a dark sense of humor to stomach. It featured Steve Blum as the inebriated space pirate Grayson Hunt, ex-elite soldier seeking revenge on his former commander, General Victor Sarrano. After falling into an ambush and shooting down Sarrano’s enormous warship, Hunt and his crew also go down, crash landing on the resort planet below. The locals aren’t friendly, and Grayson soon finds himself shooting his way through the planet to find materials required to repair Ishi, his comrade, who was wounded in the crash. Soon enough, Grayson finds himself a special leash he pilfered from the corpse of a Dead Echo soldier (the unit that replaced Grayson and his men). With it, he is granted access to drop pods (units that dispense ammo, upgrades, and skillshot information) and a wild array of new abilities. 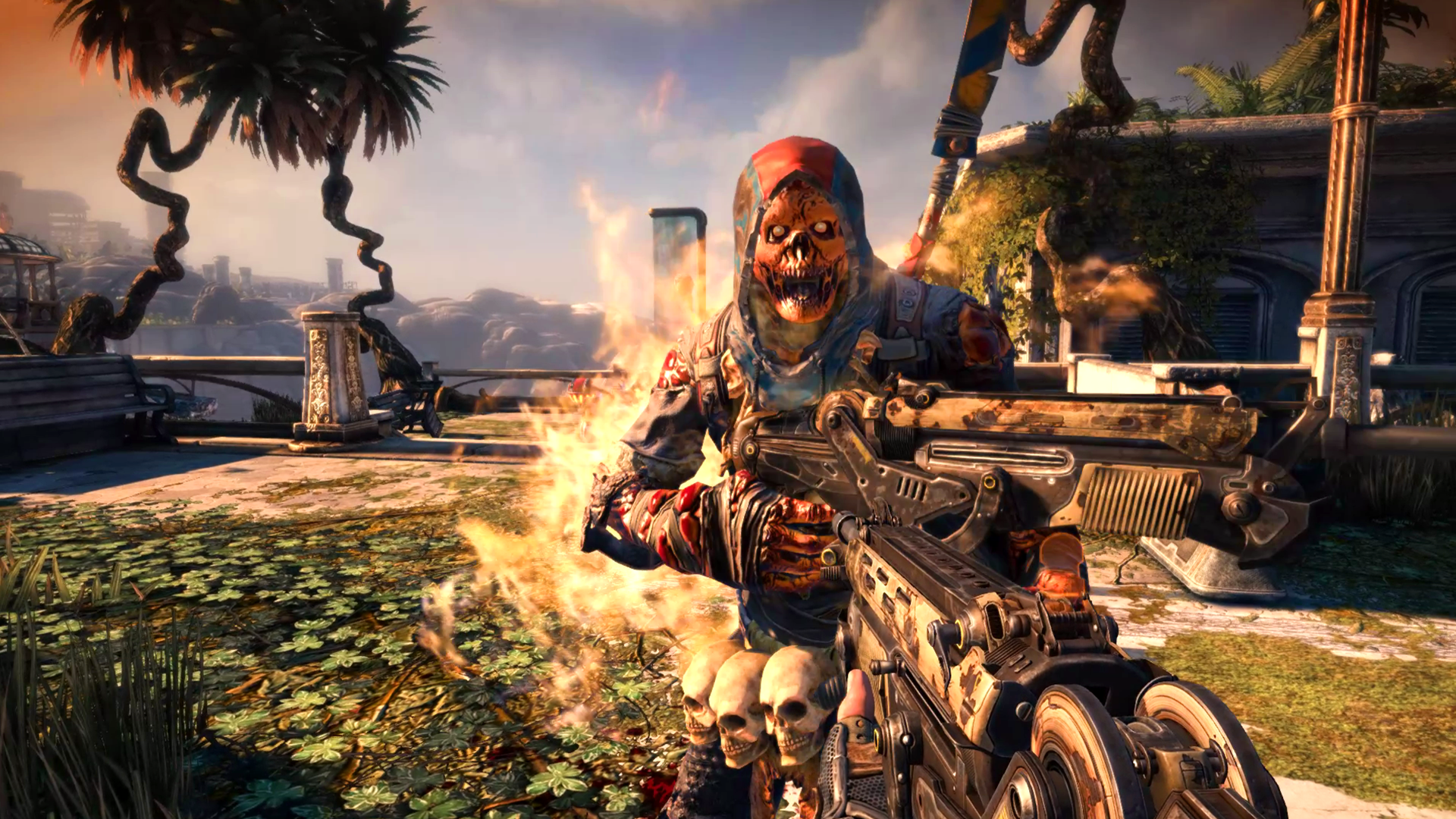 The leash is where Bulletstorm earns its accolades. With the leash, Grayson can begin performing skillshots. Approximately 150 skillshots exist in game, a number set to each weapon and category. Grayson is awarded points (in this case, currency) by performing each skillshot with a bonus for the first time using each shot. The brilliance of the skillshot is that, not only are they ridiculously enjoyable to pull off and strategize with, they keep the game feeling fresh. Since weapons are scattered throughout the first three quarters of the game, skillshots and methods for killing are inevitably always changing. Grayson can hold up to three weapons at a time and can interchange them by either picking up a fallen weapon or switching them at a drop pod.

Even the skillshots couldn’t function well if gameplay was lacking, however. To the credit of People Can Fly, Bulletstorm is and remains one of the smoothest and most enjoyable FPS experiences I’ve had to date. Bulletstorm’s biggest “issue” is that it maps its buttons uniquely. This isn’t really an issue, though some gamers can’t get over games that don’t conform to the Call of Duty standard. That said, Bulletstorm couldn’t work any other way. Literally every piece of the environment can be used as a lethal weapon, and the gunplay itself works in tandem with the setting. Nothing feels wrong or bulky (outside of a few outdated invisible walls), and Bulletstorm thrives because of it.

Visually, Bulletstorm shows a bit of its age. The weapon models look excellent in 4K, and the game was built for the PS4 Pro. Character models suffer the most, as shiny visuals can’t fix the blemishes of engines past. Regardless, the world of Bulletstorm is aesthetically pleasing, but it still lacks the sheer beauty of a game like Horizon: Zero Dawn or Uncharted 4. In the stead of stunning visuals, Bulletstorm compensates with massive amounts of gore and severed limbs. It’s a formula that doesn’t always work for games, but Bulletstorm was built just for it.

For me, however, the biggest improvement and most noticeable addition to Bulletstorm is the Duke Nukem content. With the click of a button and a quick download, the player can transform Grayson Hunt into Duke Nukem (character model and all). If this isn’t great enough, Jon St. John – the voice actor of Duke Nukem – fully voiced the entire Bulletstorm script. But Gearbox and People Can Fly don’t just take Hunt’s lines and spit them out verbatim, no. Duke Nukem has his own personality, and his script was shaped around that. Even though other characters may refer to him as Grayson Hunt, he is never done trying to correct them.

Lastly, Bulletstorm: Full Clip Edition offers gamers maximum value for their buck. Coming in at a sub-$60 price tag, Bulletstorm: Full Clip Edition provides the original gameplay plus its two DLC packs. Multiplayer and echoes add hours of extra play time that isn’t cheap, and were my favorite aspect of the original release. The biggest multiplayer issue is finding a game, which I have struggled to do so since launch. Fortunately, a few of my friends enjoyed the original as much as I and also procured the game.

For those who care, Gearbox Publishing is allowing People Can Fly 100% of the revenue from the first 100,000 copies of Bulletstorm: Full Clip Edition sold. People Can Fly will decide the fate of Bulletstorm, too, based on the total number of copies sold. If there’s a desire for a sequel – something which the game left wide open – then fans of the series could hope to see a future release based on the number of sales.

In conclusion, Bulletstorm: Full Clip Edition is worth your money. For fans of the original release and newcomers alike, there’s a lot to love in this fast paced and vulgar FPS. Featuring a multiplayer that encourages cooperation and extra content that furthers value, Bulletstorm: Full Clip Edition will have you playing for hours on end. With the addition of Duke Nukem via Gearbox, fans of the king will also have the Nukem game that should have been. It’s an experience worth reliving, and support could mean a sequel.