Shadow of the Colossus Review

A tragic and beautiful masterpiece

Many, many moons ago, Sony Japan released the wondrous and tragically beautiful Shadow of the Colossus, a tale of a young man named Wander who journeyed to a vast landscape to revive his deceased love. Together with his loyal horse Agro, Wander was required to slay 16 Colossi, enormous beings that roam the lands. This month, Sony issued a full re-make of Shadow of the Colossus in full 4k HDR, taking an always impressive game (especially since it debuted on the PS2 and found itself remastered on the PS3) and giving it the gorgeous visuals the tale so rightfully deserved.

From the inception of Shadow of the Colossus, you find yourself galloping through the aesthetically pleasing landscape on your way to what appears to be a temple and altar of sorts. A mysterious and booming voice directs you to slay the Colossi. The good majority of controls and combat from the original Shadows of the Colossus remains in tact, a system that, overall, works fairly well in this remake. As you approach your first Colossus, a sight you’ll most likely never forget, you learn that you must climb the beast and drive your sword through its weakest points, thus ending its existence. 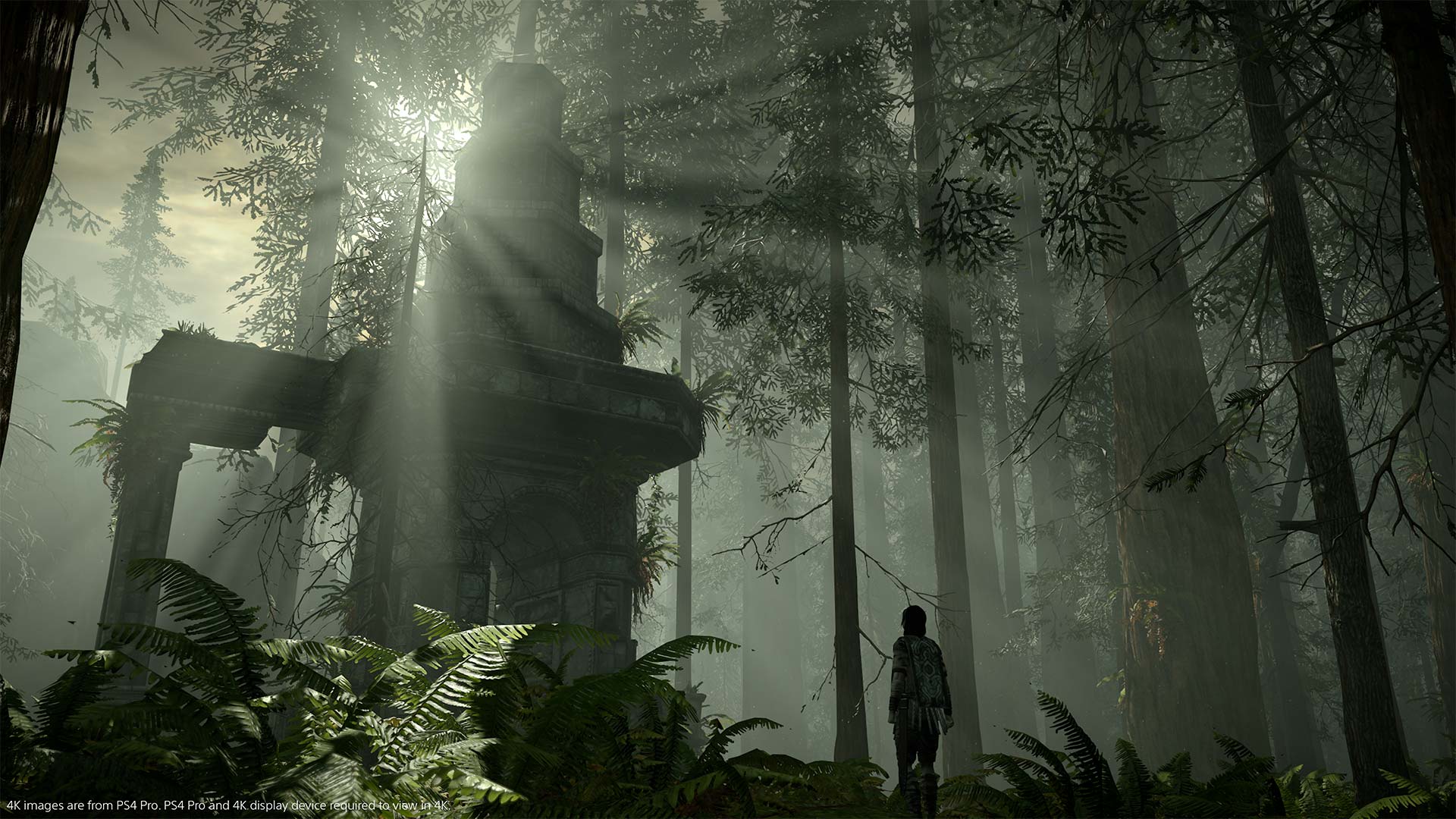 That may sound simple – and often, the battles are pretty easy – but the Colossi you’ll encounter are mammoths. Mounting and finding the weak spots is another matter, as well; some of the Colossi require a very specific route in order to climb and others need you to break their armor. Each Colossus comes with a very specific and unique challenge as each Colossus is different from the next. Your basic controls came down to holding R2 and moving your left directional stick to climb (while keeping an eye on your stamina bar) and R1 (your attack). You come equipped with a sword and a bow, the former of which you can use to track the location of the next Colossus and the latter to use when necessary during battle (there’s a Colossus, for example, that requires you to shoot out two of its legs while it climbs a coliseum in order to expose its weak spot).

Perhaps the most stunning change in Colossus’ remake is its visual fidelity. On my 4k HDR LG television, Shadow of the Colossus is a breathtaking game. As you navigate your way through the dark and barren rocky lands – impressive in their own rights – and make your way into the sunlight and verdant fields, you can’t help but marvel in the pure art that encompasses the world in Shadow of the Colossus. Every piece of the landscape feels like the developers poured hours into perfecting, and it clearly shows. My biggest graphical ‘gripe’ – and I use that term loosely in this case – is that it appears the characters weren’t as well loved for. 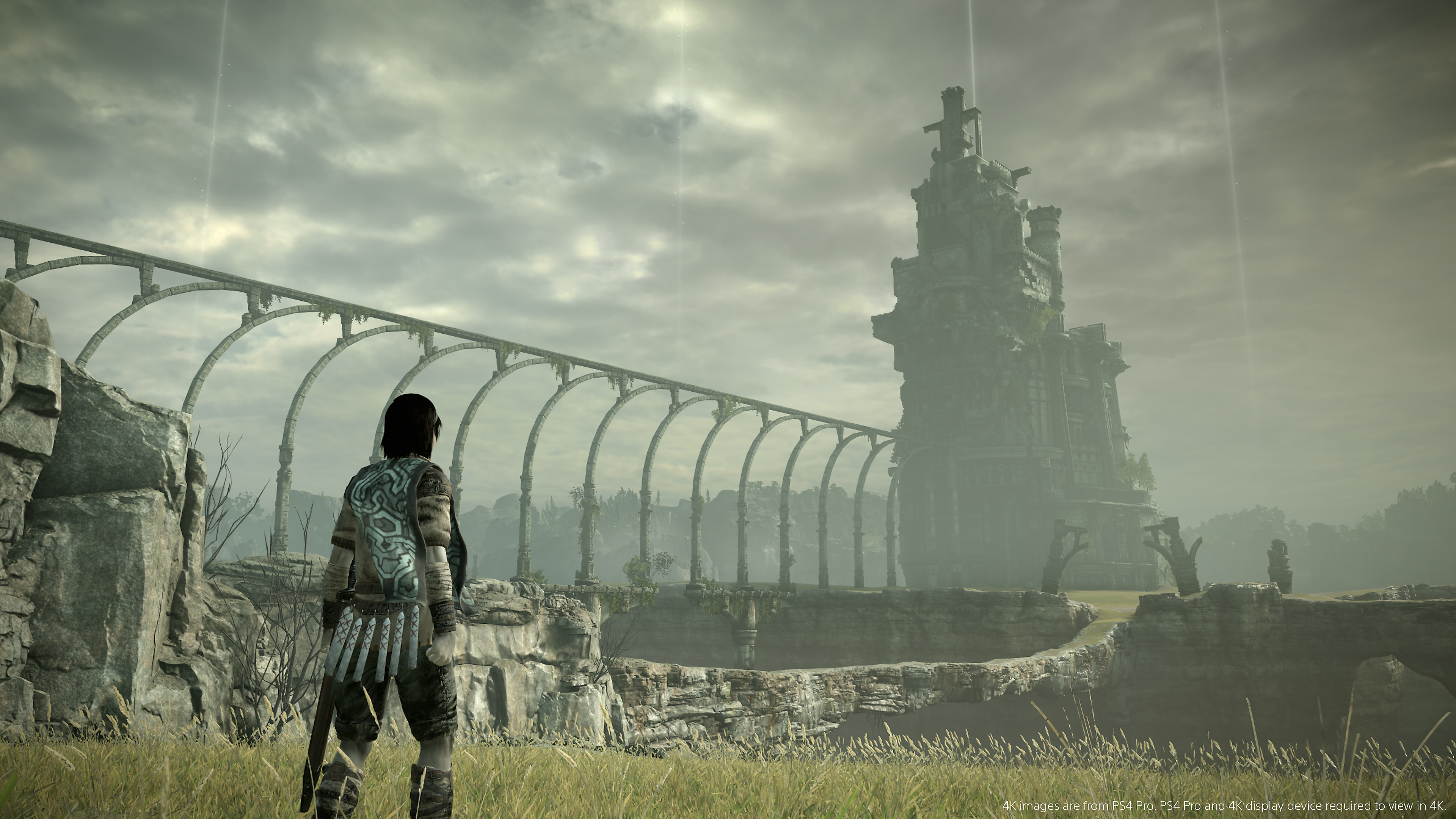 You won’t find many negatives in the overall experience, too, unless you desperately search for them. The plot is simple and dark, and the ending, while foreshadowed and, perhaps, guessable, still packs an emotional punch. Combat remains fresh (even though it is an extremely simple system) due to wildly different battles for each Colossus. Knowing my way around the world helped, of course, but exploration provided me with such beauty that, even if I was lost (and it still did happen to me), I still reveled in the scenery.

In all, Shadow of the Colossus is a heart wrenching masterpiece that fans, new and old, can still enjoy. This is how a remake should be handled, and the love and care that flooded the project is visible and abundant. A sublime soundtrack that aptly matches the tones of the game and the battles with the Colossi mixed with the inevitable feeling of impending doom translate perhaps better in this version than before. I often have a hard time replaying games I’ve already played through, but Shadow of the Colossus is a beast of its own, and it deserves more than one playthrough. Fans of old should know what they’re getting in to, and newcomers should have a pretty enticing experience as they draw their saga to a close. It isn’t often that a game transcends multiple generations, but Shadow of the Colossus has done just that.