Welcome to the Family

For many years, fans of the Resident Evil series wavered between their intense love of the franchise and disappointment in what direction the games continued to progress. Resident Evil 6, for example, felt the loathing of a thousand thousand woeful fans, and it generated quite a bit of disdain. Since Resident Evil 4, the hit horror franchise felt less like horror and more like action, with continuously larger set pieces, a bigger is better ideology in narrative, and evolving creatures necessary to keep up with the hastening pacing. All of this culminated to a large disappointment when Resident Evil 6 released (ignoring, of course the decent Revelations saga).

Then enters Sony’s E3 2016 press conference. In the late hours of one evening during my honeymoon, I watched Sony’s show, curious about but not particularly interested in its VR segment. Suddenly, a first person horror experience commandeered my phone, and what appeared to be a pretty horrific presentation ensued. When the trailer ended and the camera zoomed out to display a decrepit, dusty mansion, the words Resident EVII (Resident Evil VII) faded in – leaving many and me in awe and eager for its release. Why? Resident Evil VII appeared to reinvent the Resident Evil formula and stormed back to its roots. Terror became the focal point of the game – something the player notices from nearly the inception – and the focus upon just the Baker house and you, Ethan, helped bring the franchise back into something relatable.

But I get ahead of myself. The first aspect of Resident Evil VII that players will notice is the first person perspective. A first for the long storied franchise, experiencing Resident Evil through the eyes of its character creates a much more intimate and horrifying product. Mostly seen through the eyes of Ethan, a few VHS video tapes, and a brief stint as a different character toward the end, Resident Evil VII’s slow paced opening inspires anticipation and leads, almost perfectly, into the onslaught of gore, terror, and action. 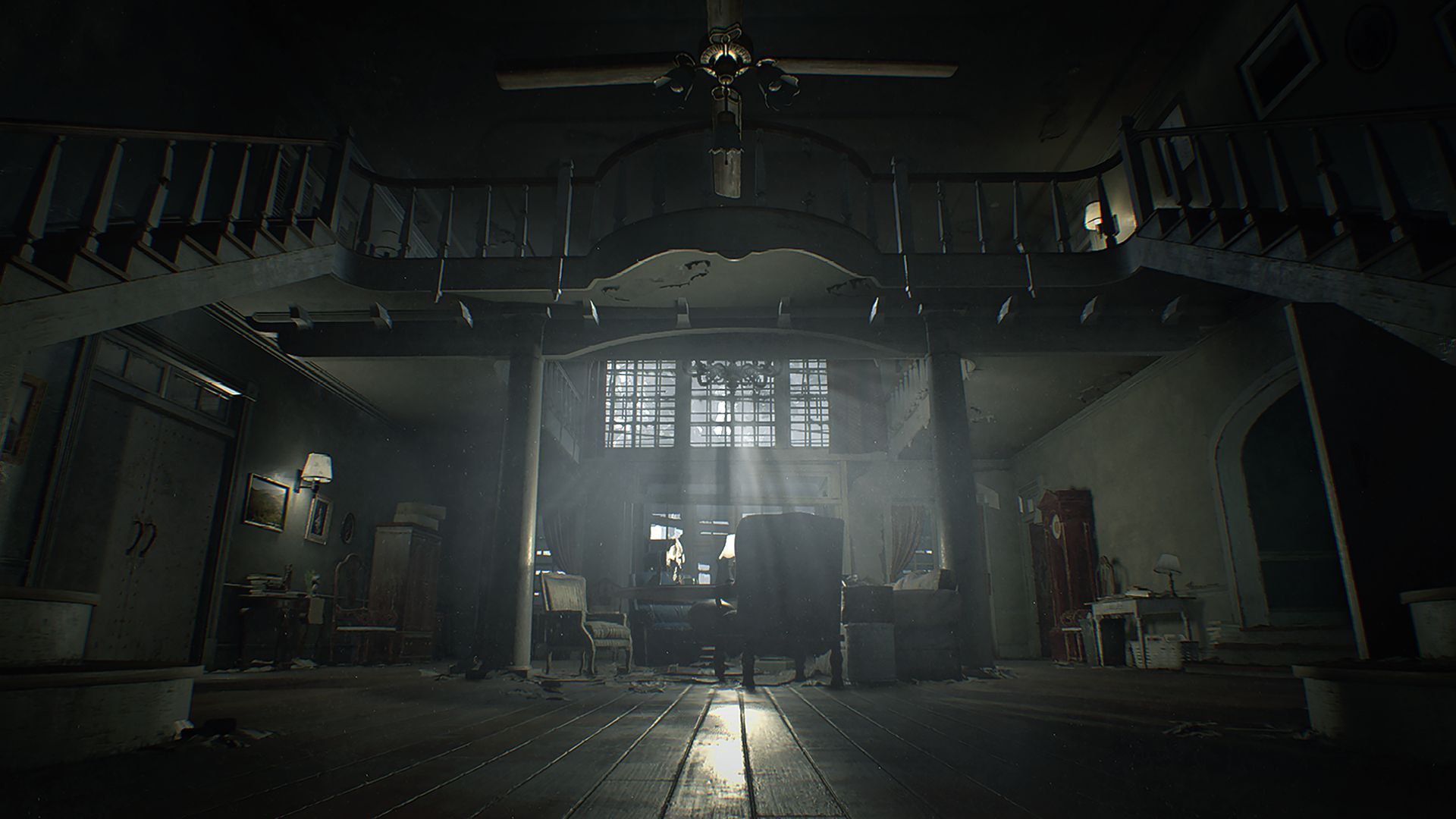 Yet this isn’t the action of your father’s Resident Evil. Resident Evil VII pits the player against three types of enemies: those one can kill, those one cannot kill, and boss fights. Without spoiling a great deal of the narrative, which I feel is a pretty key aspect of Resident Evil VII, the player will find him/herself navigating the confinements of the Baker mansion, evading the crazed family and fighting or dancing around the Molded – the creatures of Resident Evil VII. In this Resident Evil, however, stealth, ammo conservation (until the end), and maneuverability command the most attention. You learn early on which enemies are killable and which ones can be avoided by running circles throughout the manor, which is a vital skill. In the first quarter of the game, ammunition is scarce, and your knife is worthless against any of the enemies.

Bringing Resident Evil VII back to the scrounging days of Resident Evil caught lightning. Since Resident Evil VII excels in providing an intense horror experience, limiting the amount of damage one can deal forces the player to reconsider strategy and stress about what lurks beyond each corner. And speaking of enhancing horror, Resident Evil VII’s photo realistic settings, characters, creatures, items, etc. make the game shine. Visually, the RE Engine provides to gamers what, say, a Final Fantasy title provides RPG fans – believability, for one, but it also adds that layer of realism that immerses players in the story.

Immersion. This is a word that I rarely used accurately when fully considering video games until I experienced the PlayStation VR. Sure, I’ve spoken of immersion in games prior, but it has become starkly evident that I never truly understood immersion – and how could I, never having truly experienced it – before. Resident Evil VII is, perhaps, the best use of the VR I’ve had the pleasure of experiencing. I’ll make this bold statement: Resident Evil VII is a masterclass of horror, and on the VR (and anywhere) it is the scariest game I’ve ever played. And I love horror games – but nothing has truly scared me, really, ever. There’s something within Resident Evil VII that is truly unnerving, however. 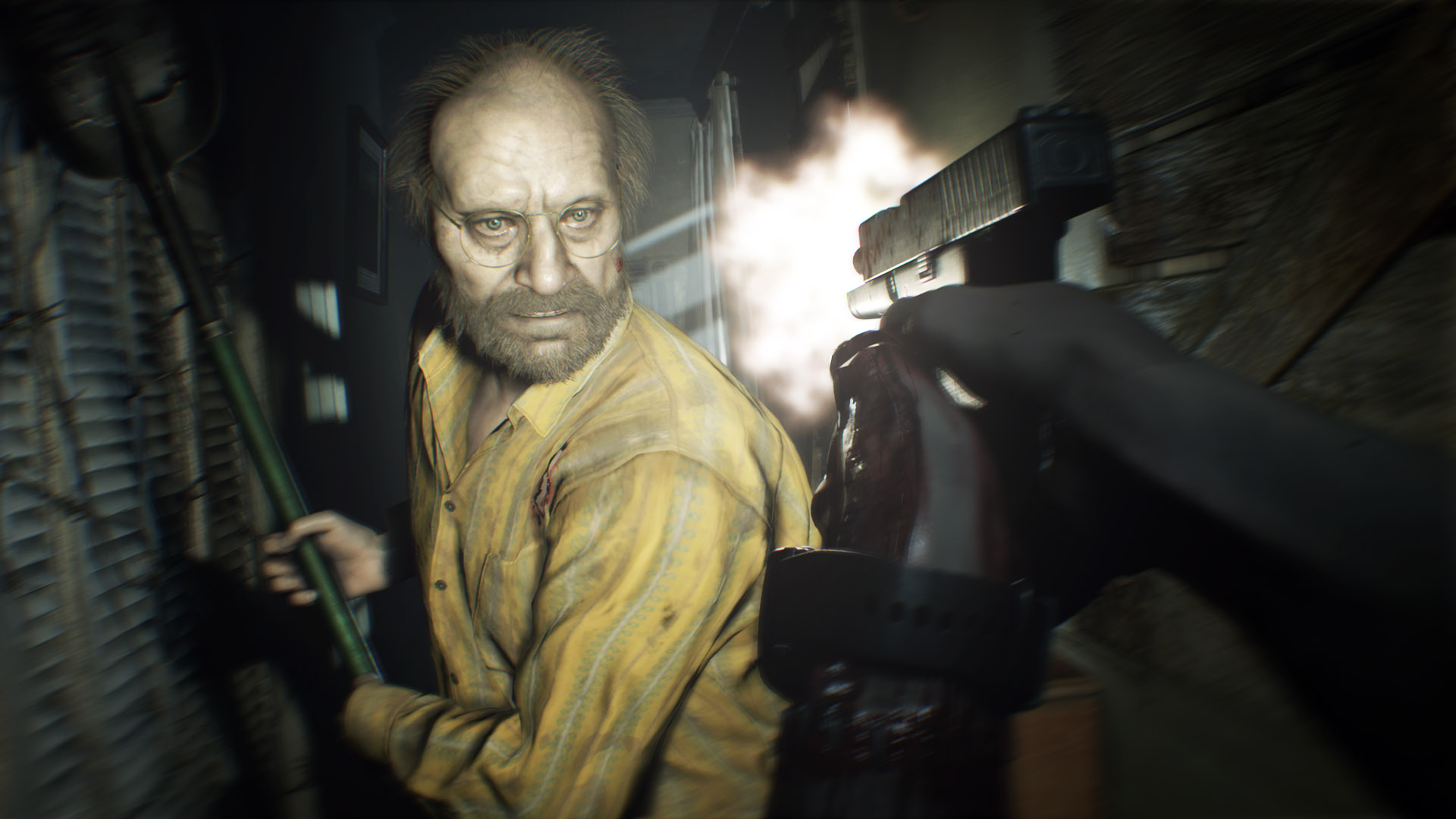 My biggest complaint about the VR – to knock that out at the beginning – was that Ethan has no body, only floating arms. Some VR games try to get away with this, and I’m not sure why (Here They Lie and E.V.E., among many PSVR games, were able to incorporate a full body), but the floating arms really hurt an otherwise spectacular experience. Pushing that aside, everything else in Resident Evil VII in virtual reality rocked. Aiming is done by moving your head. As you move your head, your aiming reticle also moves. I found this to be a much more accurate way of aiming than outside of the VR, where you aimed with the right joystick. In order to fend off potential motion sickness (something which I never experienced throughout the entire game), the VR casts a shadow around your visor that enlarges the quicker you move. Likewise, you can move based on the direction your head is facing, but by using the right joystick, you can change your camera angle (which looks like a blink). I’ve read reviews not recommending the VR, but I can’t recommend it enough. After playing the first three hours in VR, I attempted a few segments out of it (for the sake of my review fidelity), and while the visuals do look better (they’re skimped down a bit in VR to keep the 90fps 1080p standards), the loss of immersion completely killed the horror for me. (On a side note, my VR-less brother finds the pretty creepy, so perhaps the VR spoiled the non-VR experience for me).

When I put the whole idea of Resident Evil VII together, I find myself enjoying the small setting story of the Baker mansion and Ethan’s search for his missing wife. I enjoyed the scavenging for ammo and added intensity it brought. I loved the pure terror of particular scenarios in VR, and I love even more the fact that I feel like I lived Ethan’s adventure. I can vividly picture the mansion, and it remains in my memory as if I was there rather than viewing it on screen. To top it all off, the sound in Resident Evil VII – whether it be the composition, sound effects, whatever – added suspense to heightened levels that I can’t remember experiencing before. Resident Evil VII, simply put, is a game that will satisfy even the toughest critic.