5 Pokémon That I Just Do Not Understand In The Slightest

This is the Pokémon article you’ve all been waiting for. Here are the five pokémon that this particular writer, with minimal research, just doesn’t understand.

Firstly, some background to this article: I have a serviceable memory about first generation Pokémon, having played Pokémon Red near religiously as a child. This has left me in a weird limbo as the series evolved without me. I’d occasionally hear people around me talking about weird concepts with regards to Pokémon: combined Poké mart and Poké centres, gendered Pokémon who aren’t Nidoran, and a whole host of new Pokémon. In this article, I look at five of the Pokémon that I, sweet Summer child that I am, do not understand in the slightest. Join me, won’t you? 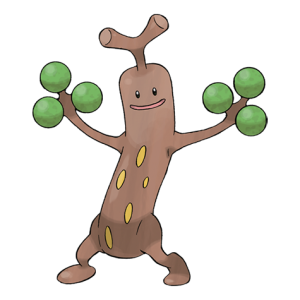 Kicking off in the distant past with generation two, we have Sudowoodo.

My impression of this particular Pokémon isn’t helped by the fact that Sudowoodo, in the image above, is quite clearly flashing at the camera. Flashing what is up for debate, and I for one don’t want to speculate on what exactly those yellow splodges are, but it looks damn proud of whatever its got going on down there. Look at that smug fucking face.

According to the blurb on Pokémon Ruby: “Sudowoodo camouflages itself as a tree to avoid being attacked by enemies. However, because the forelegs remain green throughout the year, the Pokémon is easily identified as a fake during the winter.”

One entry in, and I’ve already taken it upon myself to shake up the rules in a manner which is a flagrant betrayal of the values of listicles.

These three Pokémon, in my opinion, sum up the human condition pretty well. You start out as Slakoth: Easy going, with no real responsibilities and no real fears. You then become Vigoroth: Feeling up to the challenge of adulthood that faces you. Lastly comes Slaking: Bigger and outwardly showing the Slakoth blasé spirit but internally screaming at the terrifyingly unjust journey that is life.

Uh. So, there’s bound to be one entry here that’s hard to even discuss. This is that entry.

Floaty-arm Dalek. That’s how I’m going to go about describing this… thing. What, you got a problem with that? It’s better than bloody ‘Bronzong’.

Even the games don’t know how to frame this, uh, carbuncle? Pokémon X goes with “In ages past, this Pokémon was revered as a bringer of rain. It was found buried in the ground.” That’s right, it comes from underground, and it brings rain, maybe, perhaps… oh, we don’t really know, just quit bugging us.

The Pokémon wiki article for Beartic begins by stating that it is a “polar bear-like Pokémon”. A fair point, but I’d go one further.

It’s so unambiguously a polar bear that it looks out of place in its sheer normality.

It’s a shame I’ve put this at number two because, really, what else is there to say?

Luvdisc is, in a conclusion I’ve come to after a whole two minutes of research, the Pokémon equivalent of ‘love locks’ that people put on bridges to compromise their structural integrity in order to signify the claustrophobia of locking yourself into a relationship.

Luvdisc is a Pokémon that only lovers could love, and for that reason it deserves its number one spot on this list of Pokémon I just do not understand in the slightest.

And, please, if there’s a Pokémon on this list who you think gets a bad rep and would like to explain in agonising deatil to me, then feel free to not do that and go do something else.